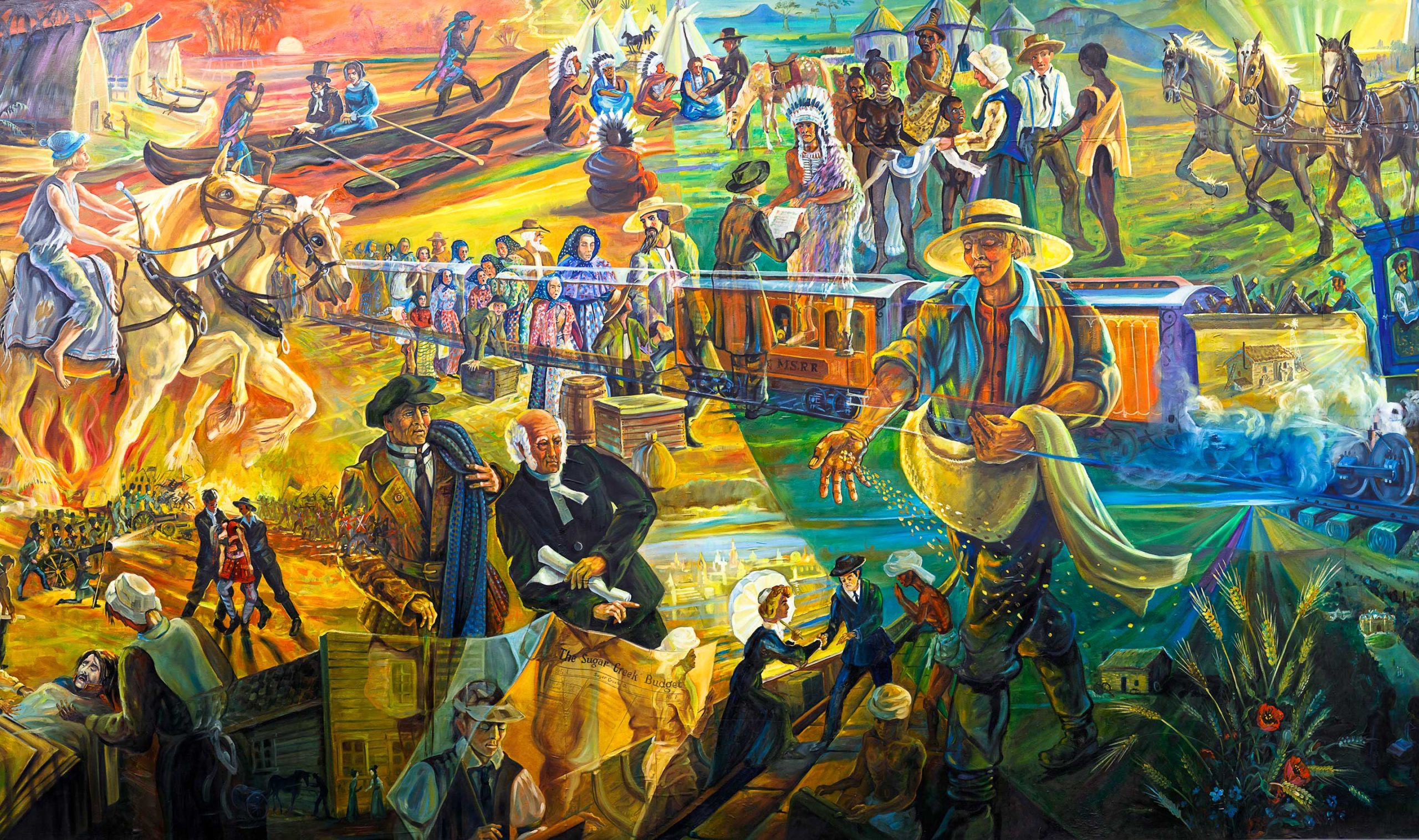 Appointments happen at many times over the course of a day, a week, or a lifetime. Some are scheduled and planned; others are those “chance” appointments that can change a lifetime with their outcome. Sometimes those appointments affect much more than just the person or people involved because our lives often connect with greater groups of people. Such is the case of one such “chance” lunch meeting in the 1960s when an artist from Ontario, Canada, traveling to Columbus, Ohio, decided to stop for lunch in a small, sleepy town named Berlin.

The artist, Heinz Gaugel, had grown up in the Black Forest Region of Germany, where he spoke a dialect of German known as Swabish, similar to the Pennsylvania German of the Amish. When Gaugel stepped onto the sidewalk after his lunch that day, he heard someone speak “his” language and immediately connected with the area. He was intrigued by the Amish culture and world, whose origins he had never heard. About ten years later, he moved his family to this community to learn more about these people who had their roots and language in the same region where he had grown up.

Gaugel grew more connected to the Amish and began to study their history. He was particularly impacted by their position on not joining the military and their belief that war and violence would never bring lasting change to the world. This was because Gaugel himself had been drafted at age 17 into the German Army under Adolf Hitler. He was immediately sent to the Western Front. Still a teenager, Gaugel and other young men in his unit were thrown into the maw of one of the deadliest conflicts of World War II: the Battle of the Bulge.

Here are Gaugel’s own words as to what he experienced in those days that would shape his life dramatically: We had guns from World War I and a few rounds of ammunition each — that’s it. We marched the entire night — not knowing where we were or where we were going — and found ourselves on the front line at dawn. This was two days before the Battle of the Bulge. We had been sent out as nothing more than a decoy. It wasn’t long before I was shot in the shoulder and passed out. I awoke to the screams of my dying friends. Of our unit, seven escaped uninjured, seven were hurt and taken to a prison hospital, and 120 were killed.

So after only one day of battle, I was injured and taken prisoner. I was taken to the hospital tents. I was absolutely petrified. I could hear people around me screaming in pain and begging to have their legs taken off. I was laying there, absolutely shaking in fear, when something interesting happened. A beautiful American nurse came up to me, took out a stick of gum, ripped it in half, and took half for herself and gave half to me. Just that small act of kindness really made an impression on me and reassured me a little.

From there I was taken to a prison hospital for six months, where my shoulder was given some time to recover. I remember American soldiers standing around my bed and laughing, “Now we know the Germans are getting desperate. They’re using children for their soldiers!” Even though my arm still wasn’t healed, I was taken to a prison camp from the prison hospital. It was horrible. You don’t know what hunger is until you’ve been hungry for months on end. All you can think about is food. My fellow prisoners and I talked of nothing else — how you prepare it, what it tastes like, what our favorite dishes were and anything else pertaining to food.

Once, I helped some other men escape. I couldn’t go along because of my arm. I hid under the floor of the tent and drew maps of their escape route. Then the night they were ready, I cut a hole in the barbwire fence that was underwater in the stream that flowed around the camp. Every time the guard walked past, one of the men would give me a whistle and I’d hold my breath and hide underwater until he was past. I cut and cut until the hole was finally big enough, and then I bid them farewell. Unfortunately, I said hello again as they were marched into the camp three days later.

After four very long months, the war was finally over, and we were told that we would be allowed to go home. So we all foolishly gulped down our food and water rations, thinking we would soon have more. Well, due to uncontrolled circumstances, our (many, many men packed into a boxcar like sardines) train trip turned out to be six days long. We almost died from dehydration, not to mention almost burned alive by a campfire gone out of hand. But we finally made it back home—the place we’d been longing for months.

These experiences impacted Gaugel a great deal. After the war, he moved to Canada, where he pursued his artistic career. While living in Canada, he traveled through Amish country and had that fateful lunch “appointment.” Since his views of war had been deeply impacted by his traumatic experiences during World War II, he connected with the history of the Amish and Mennonites’ views regarding violence. Gaugel said, “No one should ever have to go through that. Endless months of constant hunger, fear, pain, suffering … all for a completely useless cause. War is useless. It accomplishes nothing. It doesn’t solve problems; it causes more.”

With this background, Gaugel decided he needed to use his artistic talents to tell not only the Amish and Mennonites, but also the world about a group of people who have believed that war and violence are antithetical to the way of Jesus. The medium and format he chose to tell that story are still very viable today as people from at least 185 nations have heard the story of the Amish and Mennonite people to date. Gaugel died in 2000 at 73 years of age. That one chance appointment at 35 years of age over lunch at the local diner has impacted many people since. Next time we will look at the actual work Gaugel did, a mural 10 feet high and 265 feet in length that depicts this story. In the meantime, think about your own “appointments” and the impact our lives leave as we give to the people around us.

If you wish to hear more historical stories like this please call or visit the Amish & Mennonite Heritage Center. We offer guided tours of “Behalt” – a 10 ft. x 265 ft. cyclorama oil-on-canvas painting that illustrates the heritage of the Amish and Mennonite people from their Anabaptist beginnings in Zurich, Switzerland, to the present day. Behalt means “to keep” or “remember.” We are open Mon-Sat 9:00-5:00 and are located near Berlin, you can find us at 5798 County Road 77, Millersburg, OH 44654. Please call (330) 893-3192 for more information or to schedule a day or evening group tour.