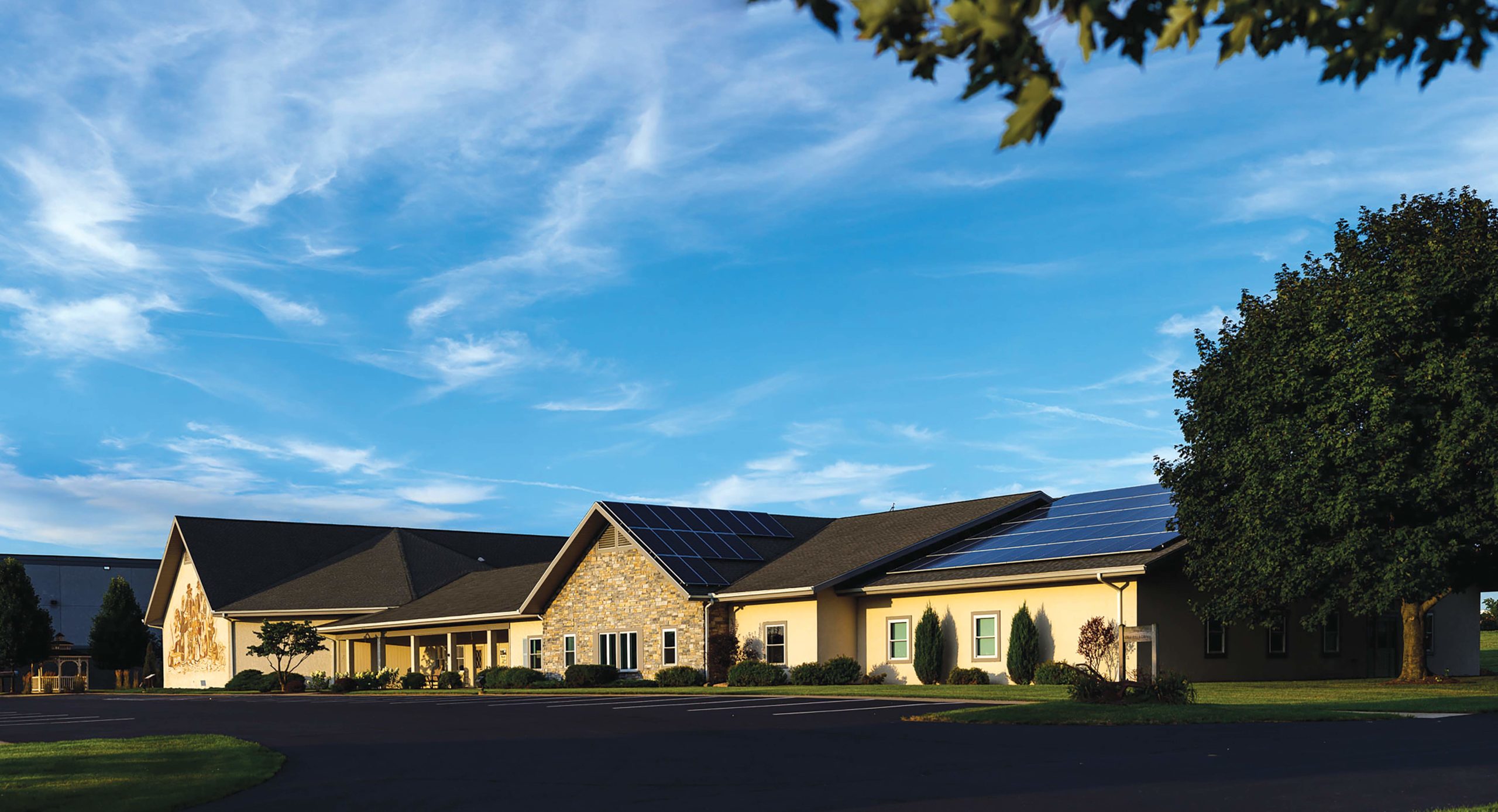 When we left Behalt last month, it was in Lancaster, Pennsylvania, where Heinz had faced what seemed to be insurmountable odds. Two heart attacks and the confiscation of the painting because of the lack of support seemed like a death knell to this work of art. But with the well-timed support of sponsors, Heinz was able to recover both his health and the painting. Heinz decided to move back to Ohio, where the support was the strongest for his work.

In the meantime, awareness of the Behalt project grew among Amish and Mennonites in the Berlin, Ohio, area. Some were concerned whether accurate information was being depicted about Anabaptists. Others were convinced that the mural needed to remain in Anabaptist hands and used to tell the story, rather than private businesses using it to acquire profit. Finally, in 1988, it became known that the painting, with about 100 feet completed, could be acquired through purchase. Heinz was willing to sell it to the community, or a community group, on the condition that a building would be secured to display it.

Moved by the power of the painting, a group of Holmes County leaders took on the ambitious building project to construct a facility suitable to house Behalt. Land was acquired, and the groundbreaking event was held on March 25, 1989. The Mural Hall was completed in the fall of 1989, and the mural was moved to its present location. Heinz sketched out most of the mural in charcoal, and visitors were charged $3.00 to see the work in progress. Heinz was able to paint the roughed-in work; slowly, the finished images came to life. However, it was not until late 1991 that Heinz figured out how to complete the last 20 feet of the mural. Heinz continued to paint full-time until October 1992, when all 265 feet were completed. A dedication service was held that same month.

As soon as the snow disappeared the following spring, Heinz set about creating the sgraffito (a mixture of plaster and paint) on the outside wall of the Mural Hall. Despite a debilitating illness, Heinz completed the sgraffito in the fall of 1993. This technique uses layers of plaster that require the artist to apply it and work with it when the plaster is wet enough to scratch through to the right color. While this is often seen on smaller pieces, like china plates, it is rare in the United States. It is a technique that is unique to this medium, and one must go back to Renaissance Italy to note such large building sgraffito. Heinz’s work depicts immigration and is twenty-two feet tall and thirty-four feet wide. The sgraffito is a work of art that is both unique and worth the visit. When you visit Behalt you are visiting not one but two unique works of art.

Today, Behalt is one of four active cyclorama murals in the United States. The others are located at the Metropolitan Museum of Art in New York City, New York; Gettysburg National Military Park in Gettysburg, Pennsylvania; and the Atlanta History Museum in Atlanta, Georgia. The subject of the first painting is the Palace of Versailles, and the subject of the other two is the American Civil War. It took Heinz fourteen years to paint his mural, which is amazing considering its size and scope. There are 1,247 unique, identifiable persons depicted along with crowds of people who are not identified. In addition to the people, there are 77 horses and every farm animal except for pigs in the mural. Since Heinz died in 2000 at the age of 73, we are not able to find out why he didn’t paint any pigs in the mural!

As Heinz intended, the mural is used today to tell the story of the Amish and Mennonite people and their history. People from at least 186 nations of the world, all fifty states, and all the Canadian provinces have visited the mural hall. The Moscow Ballad, the education minister of Saudi Arabia, the singer Amy Grant, state Supreme Court Justices, and many others have heard the story of the Amish and Mennonites through the art of Heinz Gaugal.

Although many rich and famous people have seen this work, the most poignant moments come when ordinary people find a personal connection to pieces of the painting. In one scene, Heinz shows a line of people boarding a ship. The ship is the Volendam, and the people are Russian Mennonites refugees from World War II. The dramatic rescue of these people is a part of the story told to guests. As it happened, a group of Canadian tourists was visiting, and at the end of the tour an old man—gray, wrinkled, and yet strong—told the rest of the group his experience of being a seven-year-old boy on this ship. Suddenly, the story and the art took on a significance much greater than dusty history–the figures on the wall became living and real.

Another engaging experience was when the Ohio Supreme Court Justices and their staff visited the mural. To think that these high-ranking officials were engaging with the story of our people, who have suffered so much at the hands of the state in the past. And yet the story moved these officials in the same way that it moves each of us.

That is the power of art. It can move people into a story that is much greater than themselves and their small experiences, engaging them in a world that is interconnected and intertwined with power and movement. As a child of this community and a patron of art and story, the mural has power beyond the written word. Often, I have sat and reflected on pieces of the story and been moved into considering my own story and life as part of something much bigger. Heinz would be delighted to hear these stories today. They are what he envisioned when he bought his first ten by ten piece of canvas, squeezed color onto his palette, and picked up his brush to begin that first scene. Just as he could not have known all the pieces of the story and scenes he would paint, he could not know all the people that would view and be moved by this immense piece of art.  //

If you wish to hear more historical stories like this or see the Mural and Sgraffitto please call or visit the Amish & Mennonite Heritage Center. We offer guided tours of “Behalt” – a 10 ft. x 265 ft. cyclorama oil-on-canvas painting that illustrates the heritage of the Amish and Mennonite people from their Anabaptist beginnings in Zurich, Switzerland, to the present day. Behalt means “to keep” or “remember.” We are open Mon-Sat 9:00-5:00 and are located near Berlin, you can find us at 5798 County Road 77, Millersburg, OH 44654. Please call (330) 893-3192 for more information or to schedule a day or evening group tour.