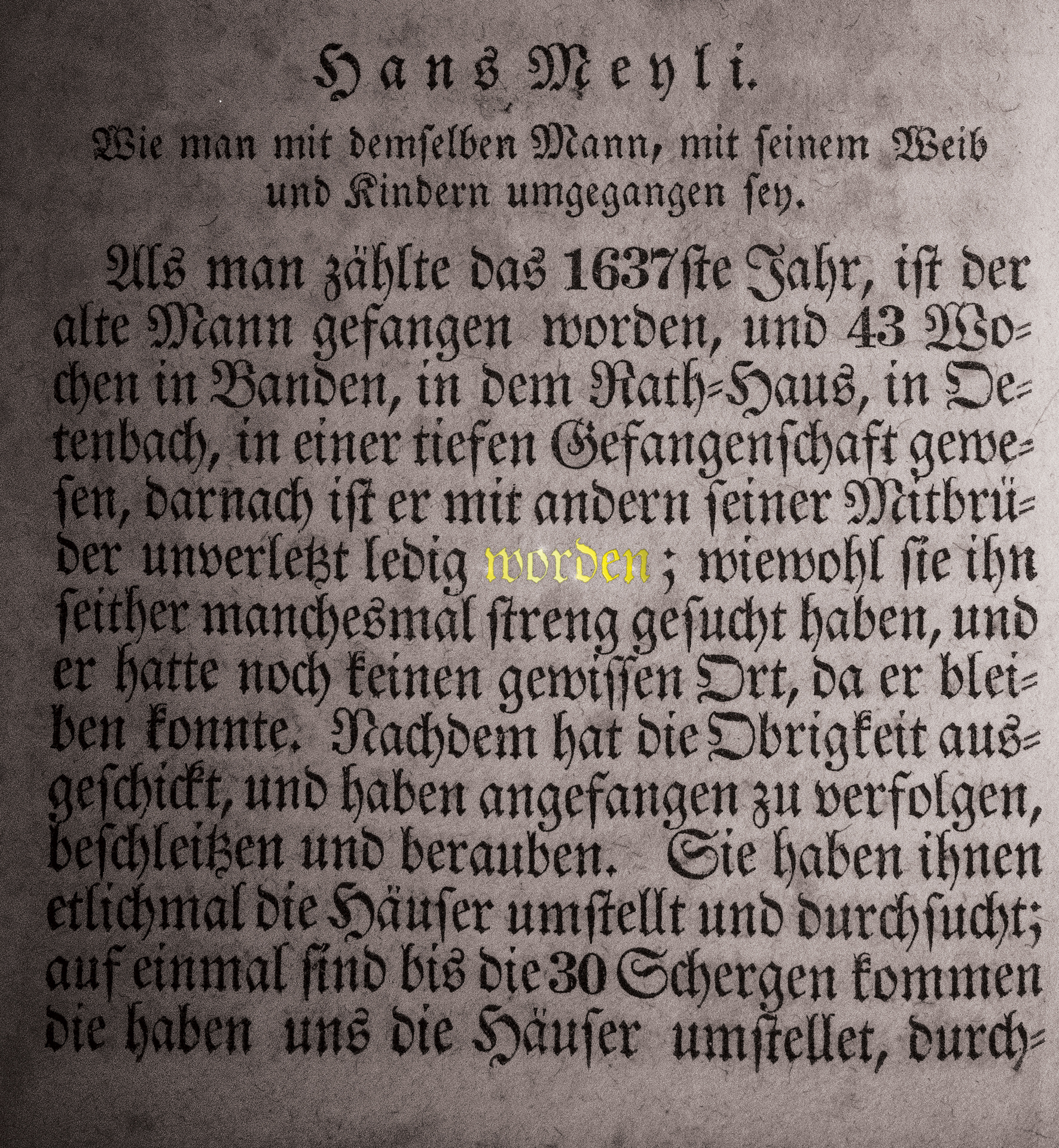 Reflections on the Martyrs (Hans Meyli)

After a brief introduction last month to “A True Report of the Brothers in Switzerland” (Wahrafftiger Bericht von den Brüdern in Schweitzerland), we begin with a story about the Meyli (Meylin) family in Switzerland.

In 1633, Anabaptist minister Hans Meyli and his wife Elsbeth lived in the town of Stallikon. In 1613, Meyli testified that he had been an Anabaptist for about four years. Later, he was imprisoned at least four times, being accused of performing marriages and baptisms. According to the census list, his property was confiscated in 1640. In 1650, he was hiding in the Zurich highlands. Two years later, Hans Meyli died.

In Martin’s collection of stories, this contained many of his own family’s stories, along with the sufferings of Zurich Anabaptists in 1635 to 1645. In 1742, Meyli’s collection of stories became part of the first American edition of the Ausbund printed in Germantown by Christian Sauer. “A True Report of the Brothers in Switzerland” has appeared in every Ausbund edition since the first 1742 printing.

Here is the first story found on page 844 in the back section of the Ausbund:

What the congregation in the jurisdiction of Knonau encountered and what took place and occurred there is as follows, first:

In 1637, this elderly man was imprisoned and kept in bonds in the Council Hall [and] in the Oetenbach, in a deep prison cell for forty-three weeks. After this, he was freed without harm with others of his fellow brothers; nevertheless they have searched rigorously for him often since then, and he still has no secure place where he can stay. After this, the authorities sent out [officers], and began to persecute, to destroy, and to steal. Several times they have surrounded and searched through houses. Once they came with nearly thirty constables. They surrounded our houses, searched through them, and secured them with guards and with weapons for several days and nights. They searched through the houses with bared swords and weapons, hacked and butted through the doors, as soldiers and constables do, with frenzied ravings and malicious eating and drinking of our stores, yes, with gluttony, excessive drinking, wanton cursing, and blaspheming of God, with oaths, raving and storming, insolence and threats. They acted more wickedly and worse than the unreasoning animals, which are created to hunt and to kill.