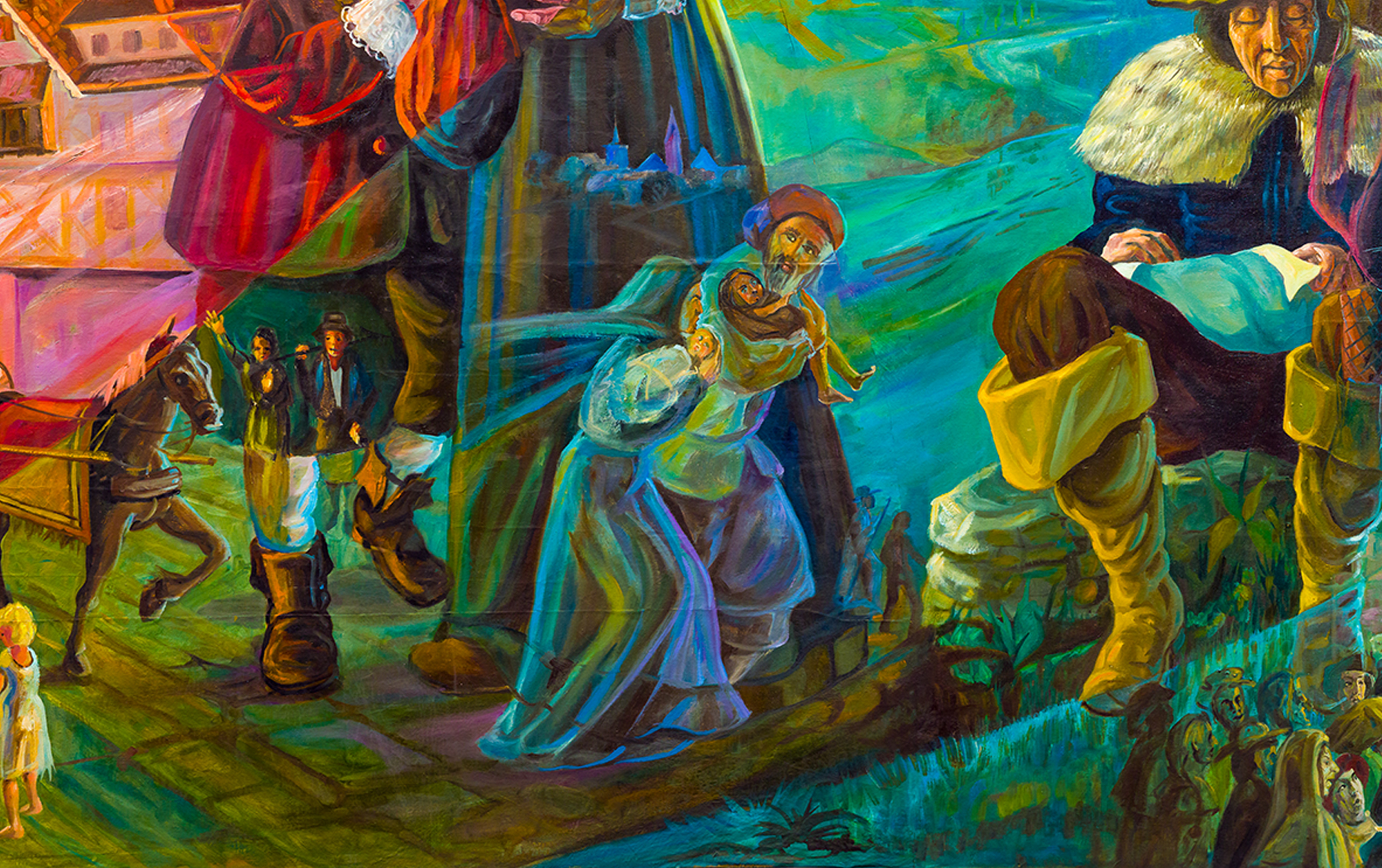 The walk begins easily, through a grassy meadow on a picturesque farm east of Zurich, Switzerland, in the foothills of the Alps. Follow the path for a short distance, and the way becomes increasingly rugged and the climb turns steeply upward as it enters a forest. The destination is a cave named Täuferhöhle, or “baptism cave,” a large, spacious cave located near Zurich, Switzerland, with natural waterfalls covering the mouth of the cave. Each year visitors make their way in a sort of pilgrimage to follow the footsteps of those who, in an attempt to escape persecution, worshiped in secret at this site 500 years earlier.1

It takes little imagination for the mind’s eye to picture people like Margret, who we met last month, easing their way through the predawn darkness towards the cave. It was a perfect hiding place. From the opening, the forest can be seen beyond the waterfalls. Human voices melded with the sound of the rushing water. All the finest cathedrals in Europe with their stained glass windows could not compete with this cathedral of earth and water and light.

The scene of meeting secretly for worship in caves and forests and behind closed doors was increasingly played out across Europe by those who practiced adult baptism. Anabaptists, or those who practiced adult baptism, believed the church should consist only of adult men and women who voluntarily chose to follow Christ and were committed to holy living. Therefore, the baptism of infants “was not the cause of their disavowal of the state church; it was only the symbol of the cause.”2 Adult baptism was the symbol by which an adult expressed their belief in Christ and entered into the church. It was an early belief in the separation of church and state and ripped apart a social fabric in place for 1,200 years. In the minds of the magistrates, this endangered both the church and the state. For this, Anabaptists were hated and persecuted by Catholics and Protestants alike and were forced to flee and worship in secret.

The percentages of women who were arrested for Anabaptism is higher than among other groups persecuted for religious beliefs and tell us that women were more central to the Anabaptist movement.3 Thirty percent of Anabaptist martyrs in the Martyrs Mirror were women, but in some regions, court records show women were nearly half of those arrested as Anabaptists.4 In the Tirol region of Austria from 1525–1531, forty-six percent of Anabaptists arrested were women.5 Since Anabaptists attempted to conceal their activities from authorities, we know only some of the women. They often come to us through lists of names in court records, and these were women for whom something went wrong.

The high number of women involved in Anabaptist activities connects to a view of the “priesthood of all believers.” Rebaptism carried with it the idea that those baptized were all “priests” with equal ability to hear the Spirit of God. Therefore, all believers could interpret the scriptures and receive direct revelation rather than going through a priest. Since, in Christ, all believers are “priests,” Anabaptist women were more nearly “companions in the faith, mates in missionary enterprise, and mutual exhorters in readiness for martyrdom,” than among other reforming Protestants.6 This belief in a “Priesthood of all believers,” characterized their actions and their worship services. 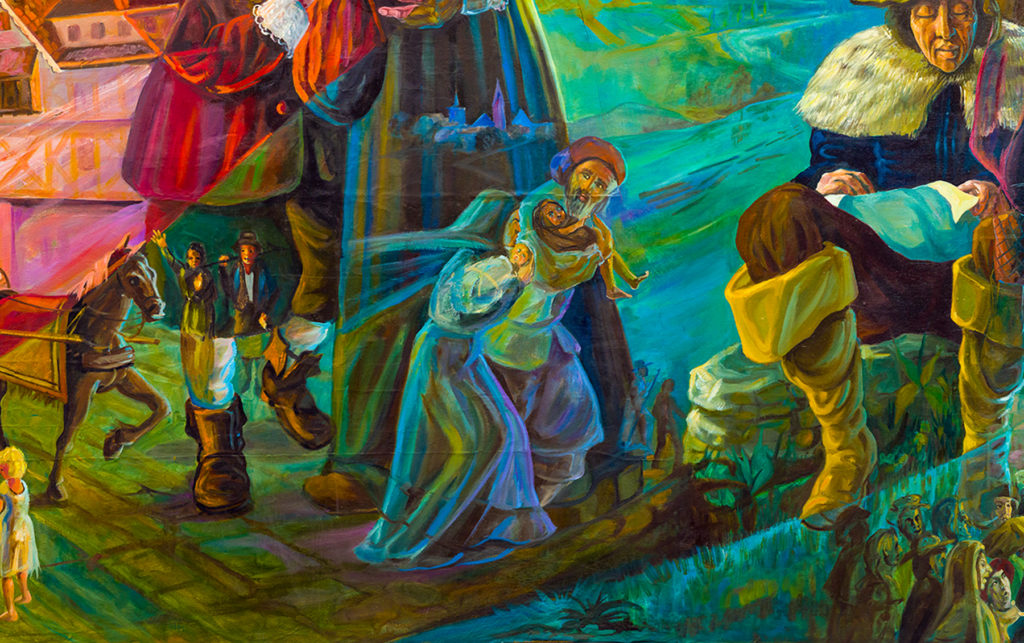 The sense of equality that arose from this teaching broke down the boundaries between the social classes of rich and poor that were firmly in place in their world. Two deacons and their deaconess wives, Katherina Wiedenmann and the wife of Laux Kreler, are clear examples of how Anabaptists broke through the strict boundaries between rich and poor and labored together as deacons in the Anabaptist group of Augsburg, Germany.

Katherina Wiedenmann was the wife of Simprecht, a poor cobbler in Augsburg listed as a “purse-keeper” for the congregation. The activities reveal they were deacons, and Katharina’s name comes up most often as the one handing out food and goods to those in need. She distributed food to needy Anabaptists, housed fleeing refugees, harbored leaders in hiding, and held secret meetings. In at least one instance, she helped to pass along a pastoral letter sent to “the women of Augsburg by Galthas Berchtold.” 7 With all the activity, their cobbler shop provided excellent cover for people coming and going without causing suspicion.

By comparison is the unnamed wife of Laux Kreler, a wealthy and connected goldsmith in the city. The Krelers labored along with the Wiedenmanns as deacons in the Augsburg congregation. It is clear they were tapping other sources and providing their own monies, which were then distributed among needy Anabaptists who were fleeing. They illegally housed leaders in hiding such as Leupold and Dorfbrunner, along with Anna, the wife of imprisoned leader Sigmund following his arrest in 1527.8

While the Krelers and Wiedenmanns labored on an equal level in the church, Simprecht complained that the poor Anabaptists such as themselves were called to court and tortured while the magistrates ignored the wealthy Anabaptists. When arrested, Simprecht was beaten out of town with rods and Katharina was led out of town in exile, unable to return to their home. The connections of the wealthy Krelers gave them warning so they could flee unharmed to the city of Strasbourg. Nonetheless, both the Krelers and Wiedenmanns labored together in the church and fled their homes for the sake of their faith.9

If both poor and wealthy women were involved in Anabaptism, so were women in all stages of life. Especially poignant are the accounts of pregnant women. Two such women were Anna Gasser of the Tirol region and Susanna Doucher of Augsburg.

When the Peasant War broke out in the Tirol region in 1525, Anna’s husband Hans was one of the leaders. By 1528, they became involved with the Anabaptists who traveled into the area, but their involvement in the Peasant War did not help them. By the end of the year they were arrested twice in connection with Anabaptism. At the second arrest, all those arrested were to be beaten at the pillory.

Pregnant women were often released until after the birth, then taken to trial. Since this was the second arrest, Hans was sentenced to execution while Anna and her friend Mairin were to be beaten publicly, though both were pregnant. Contrary to normal procedures Anna was then held in prison, where she suffered a miscarriage. She was later released; however, she lost custody of her children. Here is a woman in the middle stages of her life, her husband executed, herself pregnant, publicly beaten, and most likely tortured while pregnant. She loses all of her children including the miscarriage in prison. Yet, she still held to her faith in Christ rather than recant. She fled alone, leaving her children behind, and most likely lived out the remainder of her life in Moravia.10

Susanna Doucher is another such woman who could have been found making her way through a forest to worship outside the city of Augsburg in February of 1528. She was the pregnant wife of a wealthy sculptor in the city. Baptized sometime in 1527 against her husband’s wishes, she immediately began attending Anabaptist meetings while also housing and caring for a poor Anabaptist widow.

It was in the Doucher home that several hundred Anabaptists gathered on Easter Sunday, April 12, 1528, and here the police made a large raid, arresting the eighty-eighty who did not escape. For her involvement, Susanna was sentenced to be branded on both cheeks (a typical punishment), and banished from the city for life. Unlike many others, the council took pity on her, ostensibly since she was pregnant but more likely since her husband was a public figure and not an Anabaptist. They forewent the branding and permitted her to be led from the city in irons to humiliate her, but permitted her to return at a later time.11

These women crossed social boundaries and age barriers. Maids shared with noblewomen, and the wife of the cobbler broke bread with the wife of the knight and wealthy goldsmith. This was not the result of a special economic or social teaching; rather, it was a result of Anabaptist theology that saw the kingdom of Christ as made up of those who personally chose to follow after Christ. In this kingdom, there was an equality that superseded the Protestant reforms of Luther and Zwingli or the temporal structures created by the earthly kingdom.

These women were both peasants and nobles, mothers and wives, and former nuns turned Anabaptist. They were elderly and youth, those whose husbands were part of the movement, and those whose husbands did not support them. They spread the Gospel, held meetings, carried messages, fed the hungry refugees, and harbored the fugitive outcasts fleeing from persecution. For this, they were arrested, chained in their houses, branded on their faces, cruelly tortured, and martyred. Many died for their faith, and through their persecution or death we hear their voices today. They were women making thoughtful choices for the care of their own souls, though it often cost them their families and lives.

If you wish to hear more historical stories please call or visit the Amish & Mennonite Heritage Center. We offer guided tours of the “Behalt”, a 10 ft. x 265 ft. cyclorama oil-on-canvas painting that illustrates the heritage of the Amish and Mennonite people from their Anabaptist beginnings in Zurich, Switzerland, to the present day. Behalt means “to keep” or “to remember.” We are open Mon-Sat 9:00-5:00 and are located near Berlin, Ohio. You can find us at 5798 County Road 77, Millersburg, OH 44654. Visit them online at www.behalt.com. Please call (330) 893-3192 for more information or to schedule a day or evening group tour.