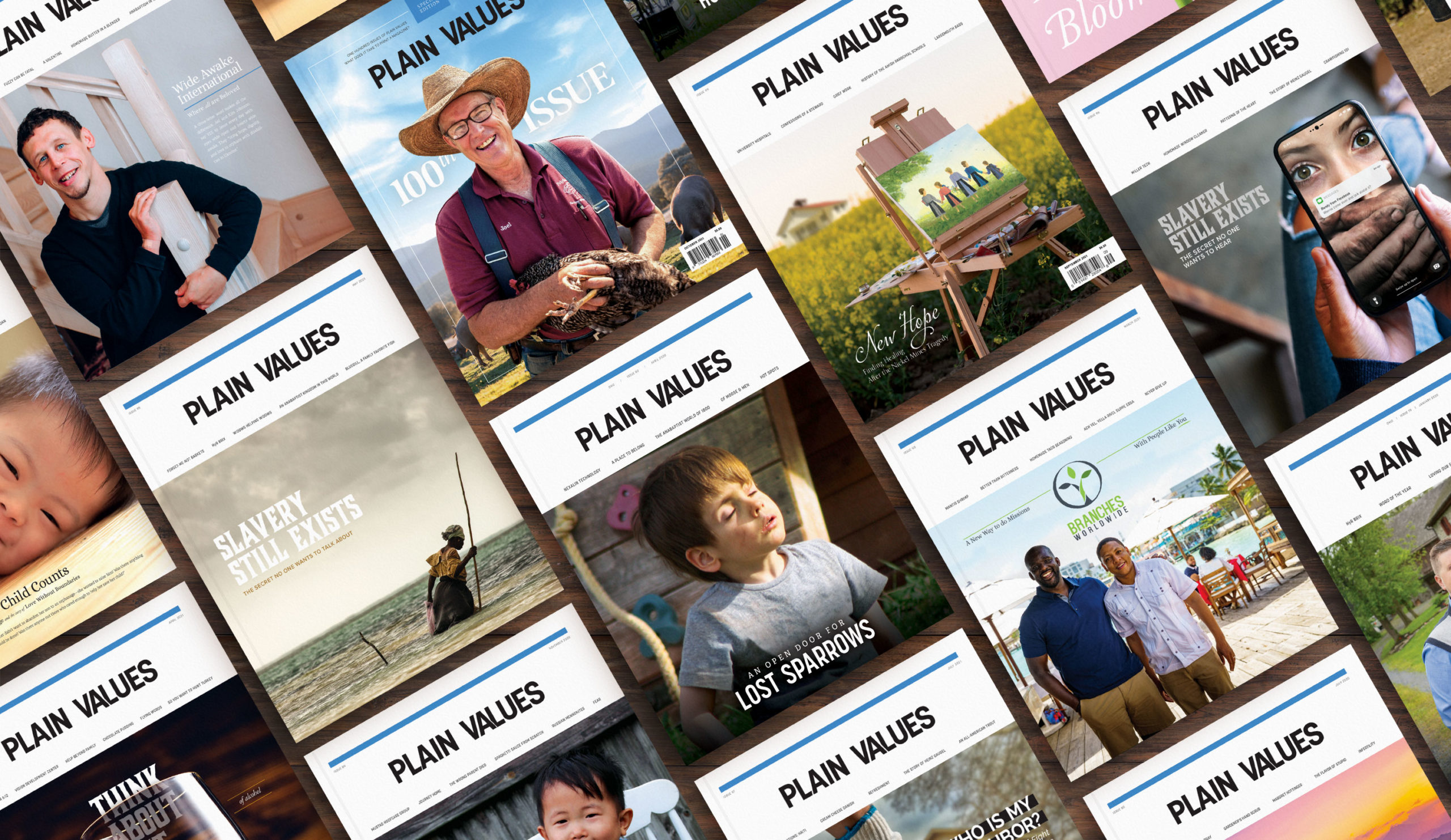 Starting in 2012 we have finally arrived at our 100th issue. The magazine itself looks quite a bit different, hopefully for the better. The world we live in looks a bit different as well. We’ve all had to navigate our share of challenges and struggles since 2012. We can look back and reflect on the past nine years, and we can clearly see the hand of God at work in our little magazine-and in the lives of our readers as well. 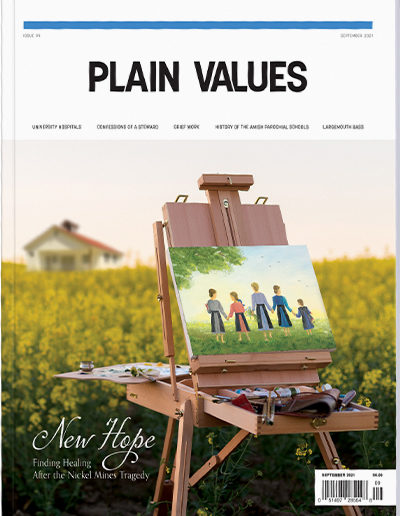 “I was inspired by the September 2021 issue. The story of the tragedy at Nickel Mines touched my heart. The forgiveness that the community of Nickel Mines showed can only come from God. The redemption that God worked in the hearts of everyone is beyond human ability. What Satan means for evil, God will turn for good.”

“The September 2020 cover article about StormAid rebuilding after Hurricane Michael was a deeply personal story for me. Because my hometown was decimated after the storm, it touched my heart to see Amish from Lancaster coming down to Florida to help rebuild. It truly revealed to me what our heritage is all about: serving other people in the name of Jesus.” 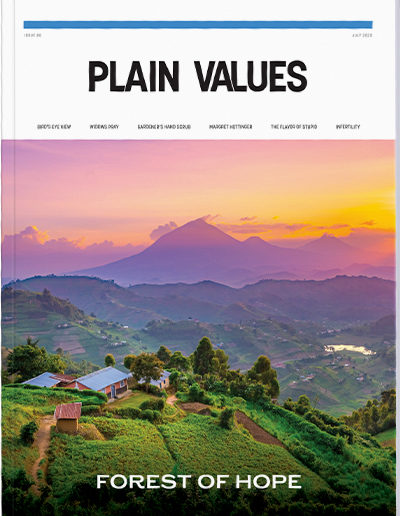 “The mission of Forest of Hope is to provide the education tuition of children by planting trees. With two growing cycles and a harvest strategy, Tim Troyer is investing in communities on so many levels: education, infrastructure, and providing jobs. I love how this has such an incredible impact on everyone within the community.” 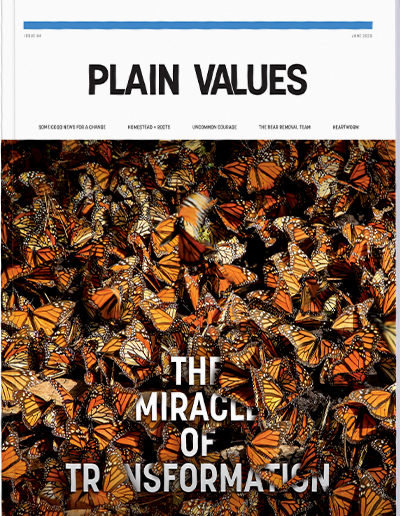 “This is the issue that showed up in my mailbox the day I got the call offering me the opportunity to work with Plain Values. I took it as a confirmation from God that this is what I was supposed to do for the next chapter in my life.”

“I was deeply impacted by this issue. It hurt to read about the orphans in Eastern Europe who have never known the love of a family or friend and are living in horrible circumstances. Reading of Israel’s story shows what God is capable of doing if we are willing to answer the call he has placed on each of our hearts.” 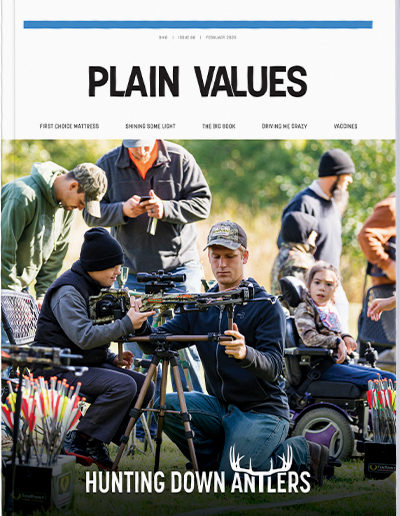 “Giving underprivileged children the opportunity to hunt deer is always a treat. My dad and I participate in a local deer management co-op that organizes an annual youth hunt. Watching the young hunters’ faces light up makes you realize it’s about more than hunting. Because of my close ties to this organization, this story meant a lot to me.” 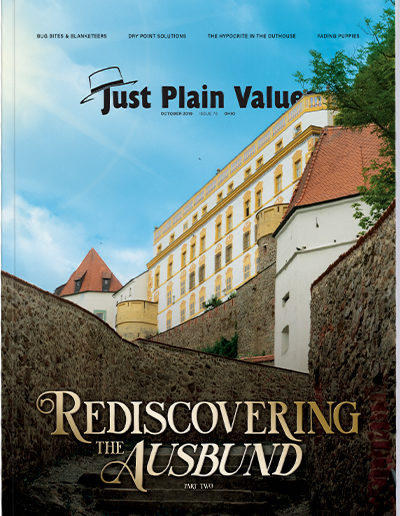 “I had the opportunity to travel with my father Elam to Passau, Germany, when he was doing research on the Ausbund. Since my dad grew up Amish, he has a deep connection to this songbook, and I got to explore more of that history with him. It was a unique opportunity to connect more with my dad and my heritage.” 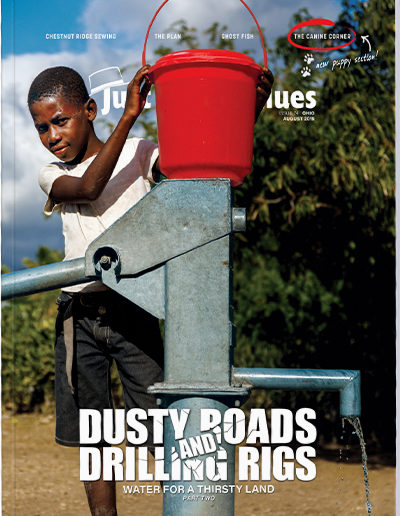 “Kevin Kate and Curt King have been drilling water wells in Haiti for many years, bringing clean water into the area, which in turn brings massive change to the villages in the region. In the spring of 2019, we sent one of our writers and our photographer with Kevin to document the work and stories. When Landon came home with over 3,000 photos, we saw an opportunity. Choosing the best dozen, we sold enough calendars to drill 3 more wells.” 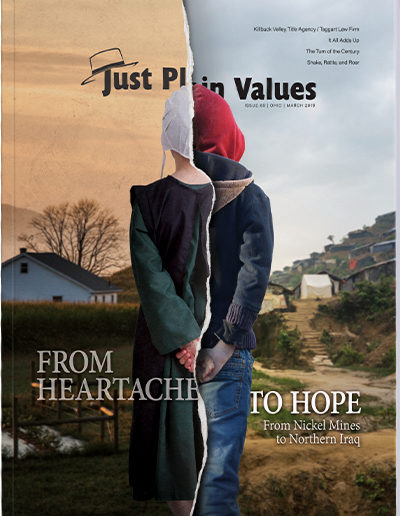 “I was truly inspired by the story of ‘Nickel Mines – from Heartache to Hope’, as well as the follow-up story in September of 2021, ‘New Hope’. I was moved by the way those families were able to react after such a horrific day, how they chose forgiveness, and how God used that choice to somehow impact and help a brokenhearted community on the other side of the world. This is how God works when we choose His ways and not our own.” 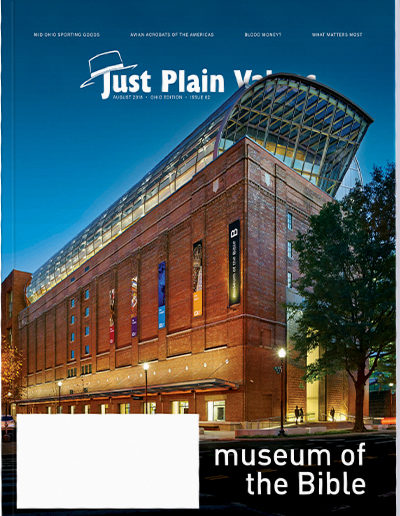 “It was an honor for us to be able to publish this story on the Museum of the Bible shortly after it opened its doors in our nation’s capital. I still haven’t been there myself, but it’s definitely on my list.” 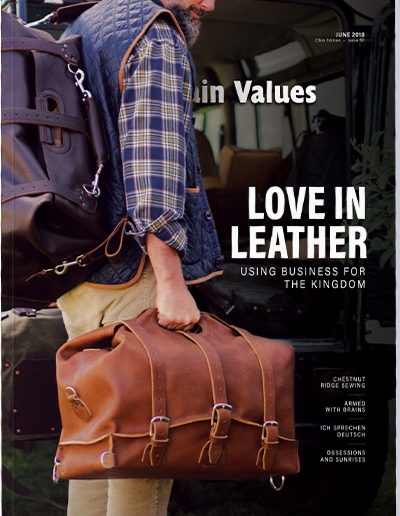 “This may be biased, but I loved this issue purely because I love the leather products produced by Saddleback Leather. I gifted my wife one of their leather backpacks back in 2017, and it is so well made we are planning on passing it on to our oldest child once we are old and gray.” 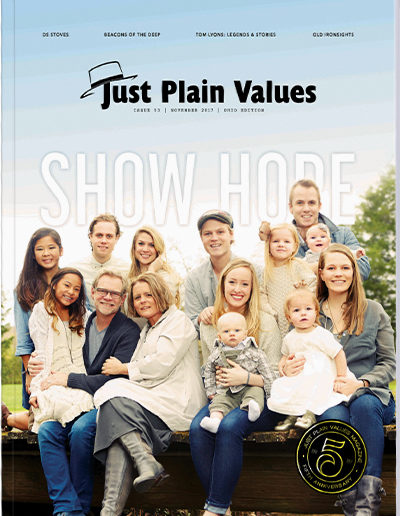 “This issue marked the fifth year anniversary of Plain Values magazine! Not only was it a fun milestone, we had the pleasure of sharing the story behind the ministry of a world-class musician, Steven Curtis Chapman!”

“In this issue we briefly shared how Hurricane Harvey hit Houston, Texas in August of 2017. A few months later, our readers sent almost $30,000, boots, and blankets to a church aiding displaced refugees.” 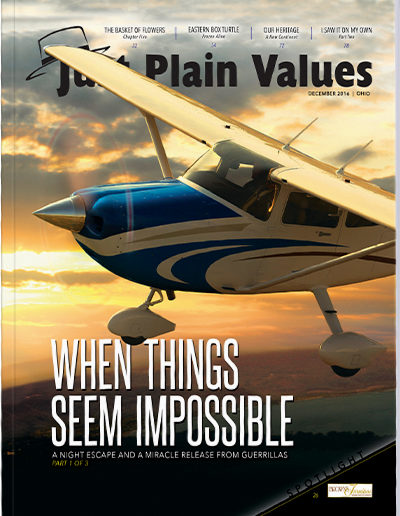 “Back in 2010, fresh out of high school, I spent 6 months living in Spain as a missionary, so I’m a sucker for missionary stories. This three-part series on how God helped Tim Cane and Paul Dye escape capture by hostile guerrillas in Colombia was incredible.” 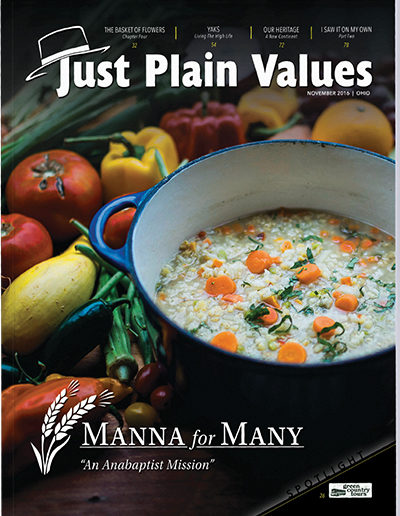 “In this issue we offered a writing class and it sold out the first day! Many wonderful stories were shared during the class with much laughter!” 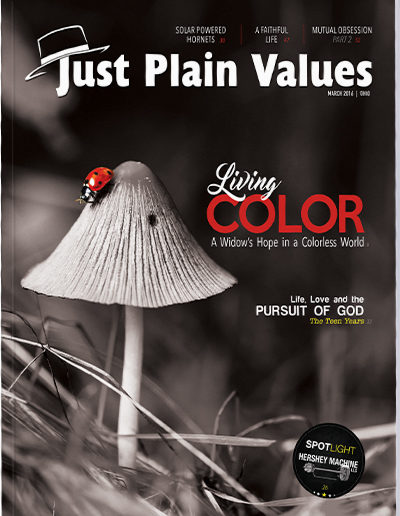 “Our first issue with a focus on loss and widowhood. It has become a favorite of many readers!”

“In this issue, we published part one of a four-part series on the life of Atlee Barkman, the father of Phil Barkman – who was our editor at the time. Phil is a dear friend of mine, so getting to read how the Lord worked in his father’s life was a joy.” 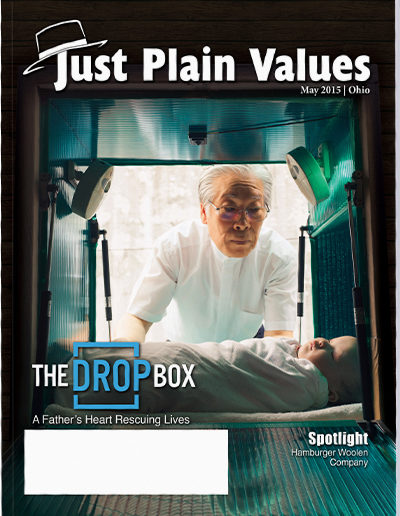 “The story we shared about what Pastor Lee Jong-rak was doing to save abandoned babies in South Korea was both shocking and inspiring. When that issue came out, my wife and I were on the brink of welcoming our first child into the world, so it hit a very tender chord in our hearts.” 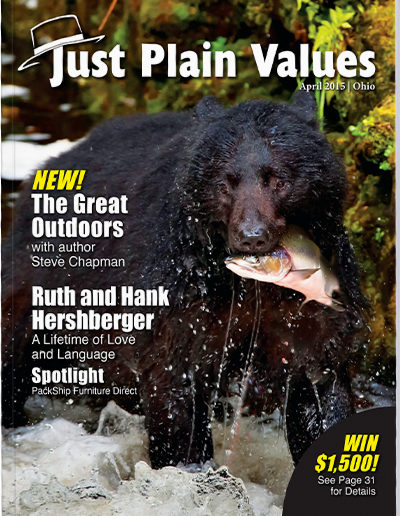 “Hank and Ruth Hershberger are dear friends who invested many years in Bible translation both abroad and within our Amish communities. Hank is 98 and Ruth is “around 90;” they continue to invest their lives praying for many people, including the Plain Values family.” 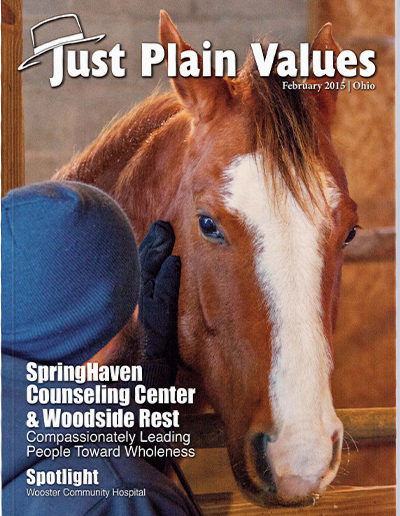 “This is just for fun, but the guy on the cover of this issue is actually me! Our hope was to highlight the equine program at SpringHaven Counseling Center by photographing a friend interacting with one of their horses. When that plan fell through, I was ‘Plan B.’” 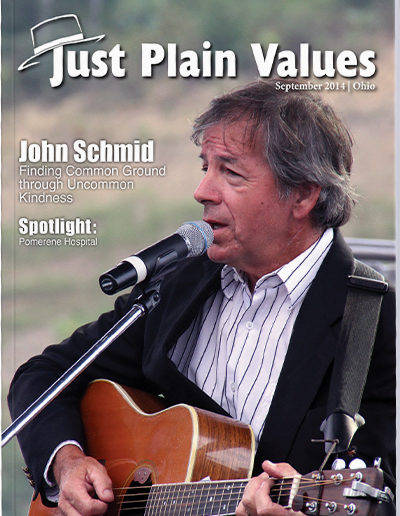 “John Schmid was my dad’s good friend, and he used to put on concerts for up to 400 people at our family cabin for many years. It was an honor to share his work and life story with our readers. We went on to publish a few books for John and are still good friends to this day.“ 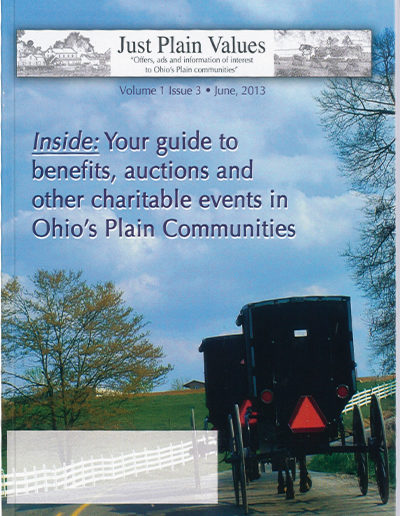 “In June of 2013, we published our first ‘official’ magazine, complete with stories for our readers to enjoy. Although it says ‘Issue 3’ on the cover, looking back, we consider this the first month we were able to call it a magazine.” 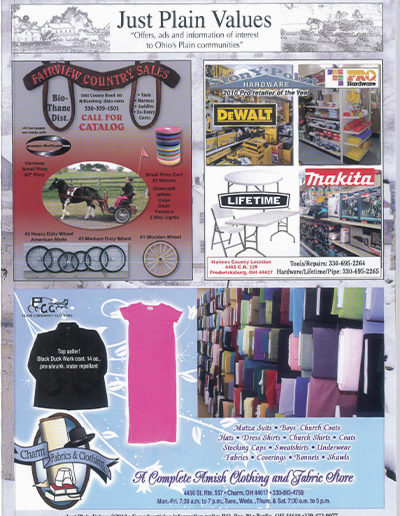 “It’s amazing to look back to our very first issue and see just how far the Lord has brought us. The first two “issues” were technically not even considered magazines–the only thing in them was advertisements! These flyers, however, were stepping-stones towards our vision of producing a magazine.” 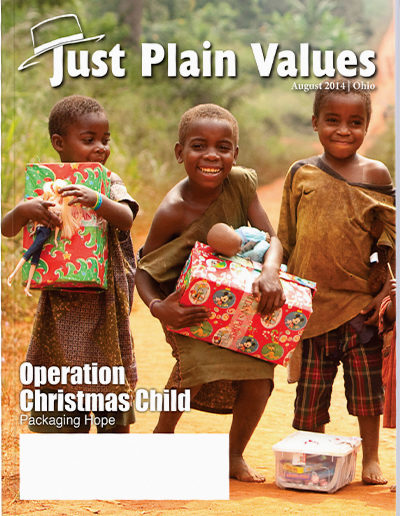 Marlin Miller, publisher
“This was the first time we highlighted Operation Christmas Child and the response was wonderful! I think more than 2,000 boxes were brought to our office. The following year I had the privilege to hand shoeboxes to children in the Dominican Republic.” 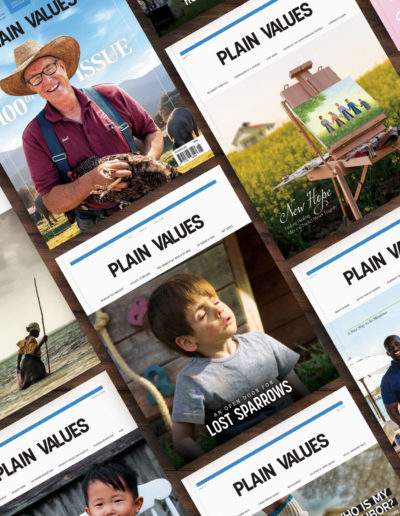