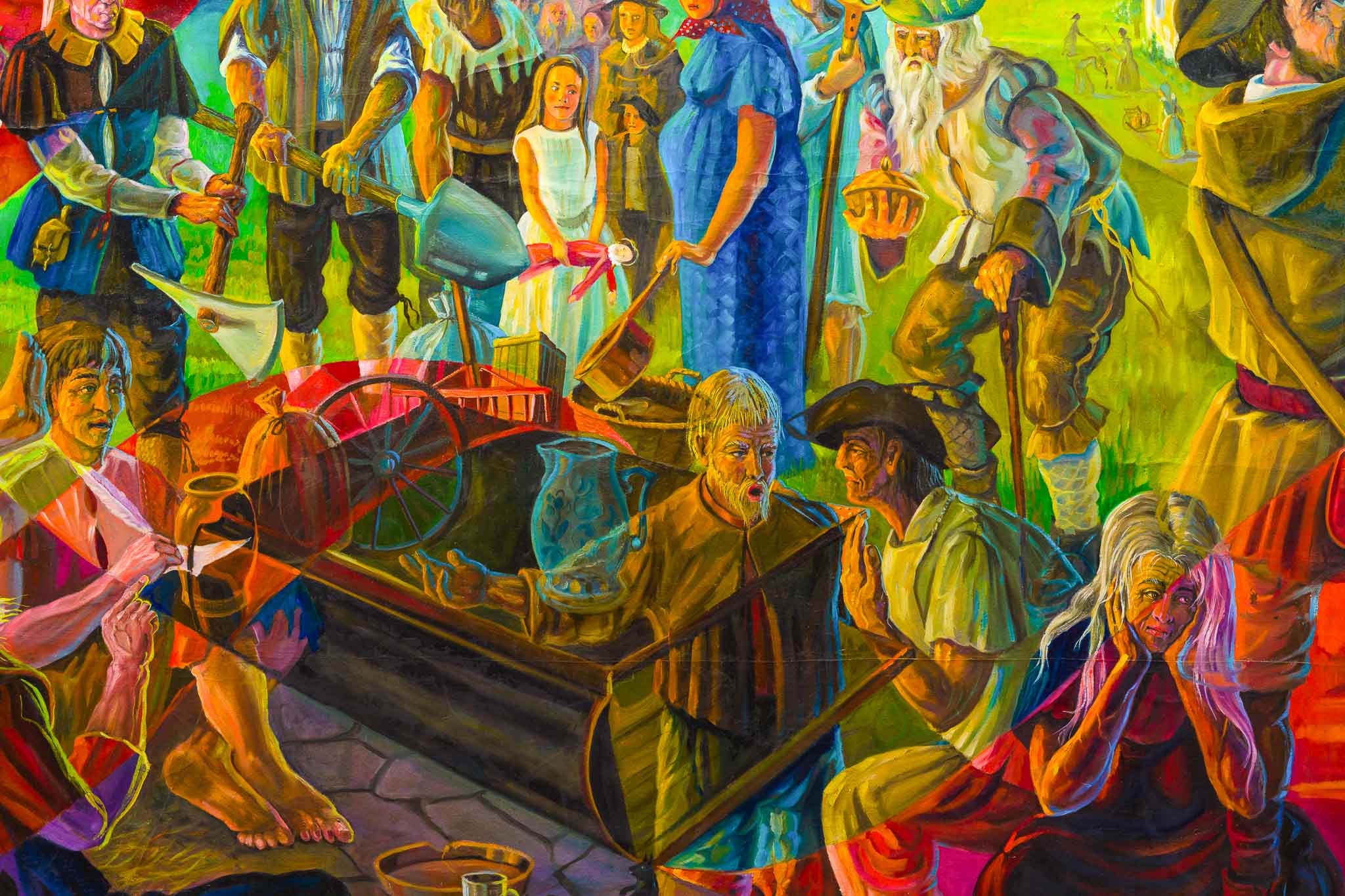 The courage it took for women such as Felix Manz’s mother to choose re-baptism fades against the canvas of Anabaptist history unless we shine a light on what it meant to be a woman in sixteenth-century Europe.  The majority of the people were peasants who lived in poverty due to wealthy landowners and rulers who abused their power. Waves of war, the bubonic plague, and famine had swept across Europe in the decades leading up to the reforms.  In this world, women and children lived at the bottom of these corrupt and abusive power systems. When reforms broke out in the early 1500s, The Holy Roman Empire and feudalism had ruled the Germanic-speaking part of Europe with its Frankish influence for over 600 years, and women, in particular, had paid the price.

Anabaptism and early lasting reforms sprang up first in the Germanic-speaking region of Europe that, prior to Charlemagne, was ruled by the Franks.  In early Frankish culture, women were bought and sold as wives with no say in the matter; they were beaten, they had no legal rights, they did not own property, and they could not read or write.  They were treated as perpetual children incapable of making adult decisions.  Moreover, if a husband died, his wife did not receive custody of her children; instead, they were given to a male heir.  These abuses were in addition to the daily toil of survival.  Any complication or abnormal pregnancy generally meant she would die while giving birth due to a lack of medical help.  Under this system, women lived a slave-like existence.

As Roman Catholicism was spread throughout the world, Christian practice and Roman civilization generally improved the lives of people in ways that were significant for the times.   By AD 800, Charlemagne decreed that no polygamy was to be practiced among his subjects, a practice the Germanic men kept even after accepting Christianity.  Eventually, women were permitted to keep their children and inherit at least some, if not all, of their land if their husbands died. Girls could also no longer be bought as a wife by a man they did not wish to marry.  Moreover, a single girl could inherit her father’s land if there were no male heirs. All of these changes fundamentally improved the situation for women under Roman civilization and Christian influence.

Although these changes were made, many of the old ways remained.  Women were beaten and misused and still regarded as children in many ways. They had few, if any, legal rights, and were viewed as the property of men. That Christianity was submersed in the various cultures throughout the Holy Roman Empire is evident in the writings of the church leaders.  In the 1200s, Albert the Great, a German Catholic bishop, writes that “woman is a misbegotten man and has a faulty and defective nature.”  Pictures, used to tell stories since most people could neither read nor write, often depicted the Genesis account where woman first ate the apple in the Garden of Eden.  It was a common story used to enforce the abusive and pagan practices.  Since the only legal language was Latin, and the common person could not read or write, these practices and teachings drove the narrative for women.

At the time of the reformation, feudalism was in place for well over 600 years as the system that allowed the Holy Roman Empire to work at a local level.  Under feudalism, a wealthy 10–12 percent of kings and queens, lords and ladies, and popes and priests ruled over the remaining 88–90 percent of people.  In the fifteenth century, a middle class began to rise due to the wars and travel.  While this provided new opportunities for men and women alike to both produce and sell merchandise, the majority remained as peasants scraping an existence from the land while bowing and serving the nobility and rulers. 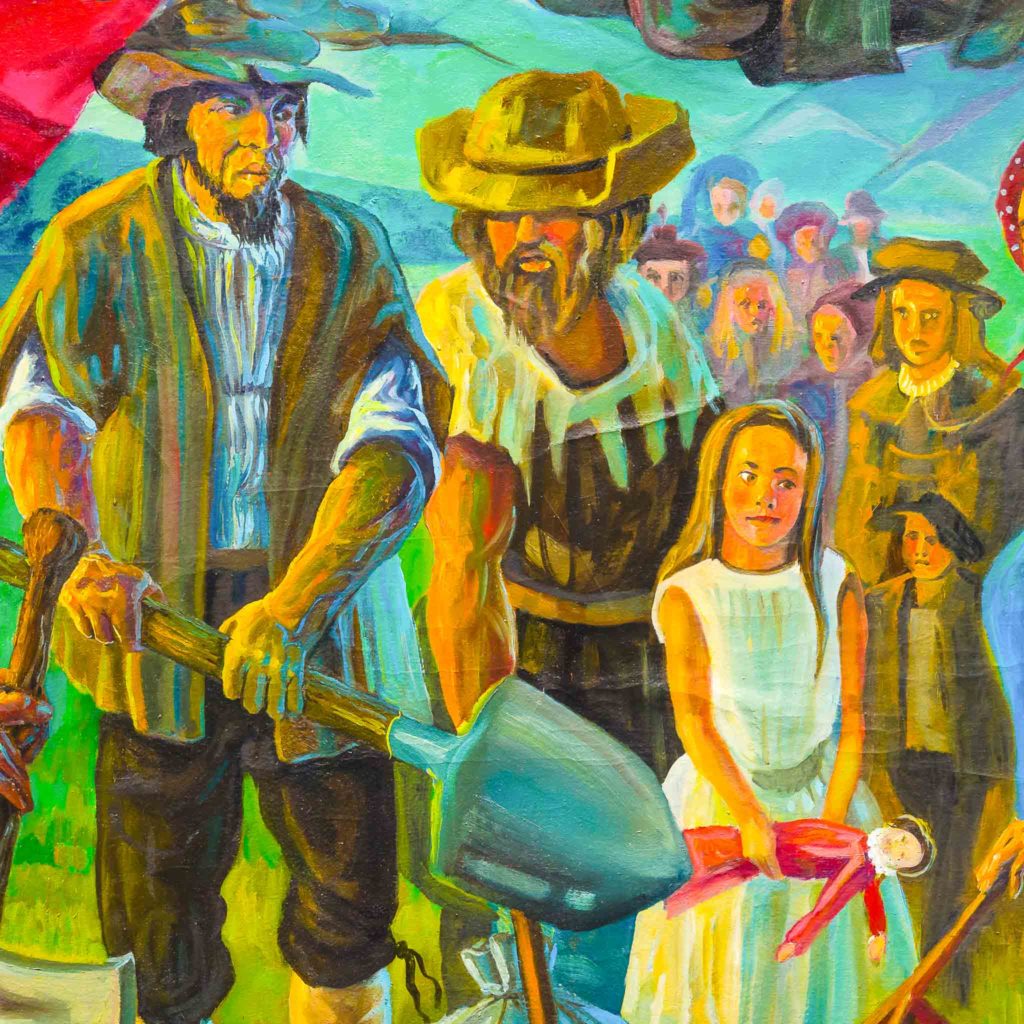 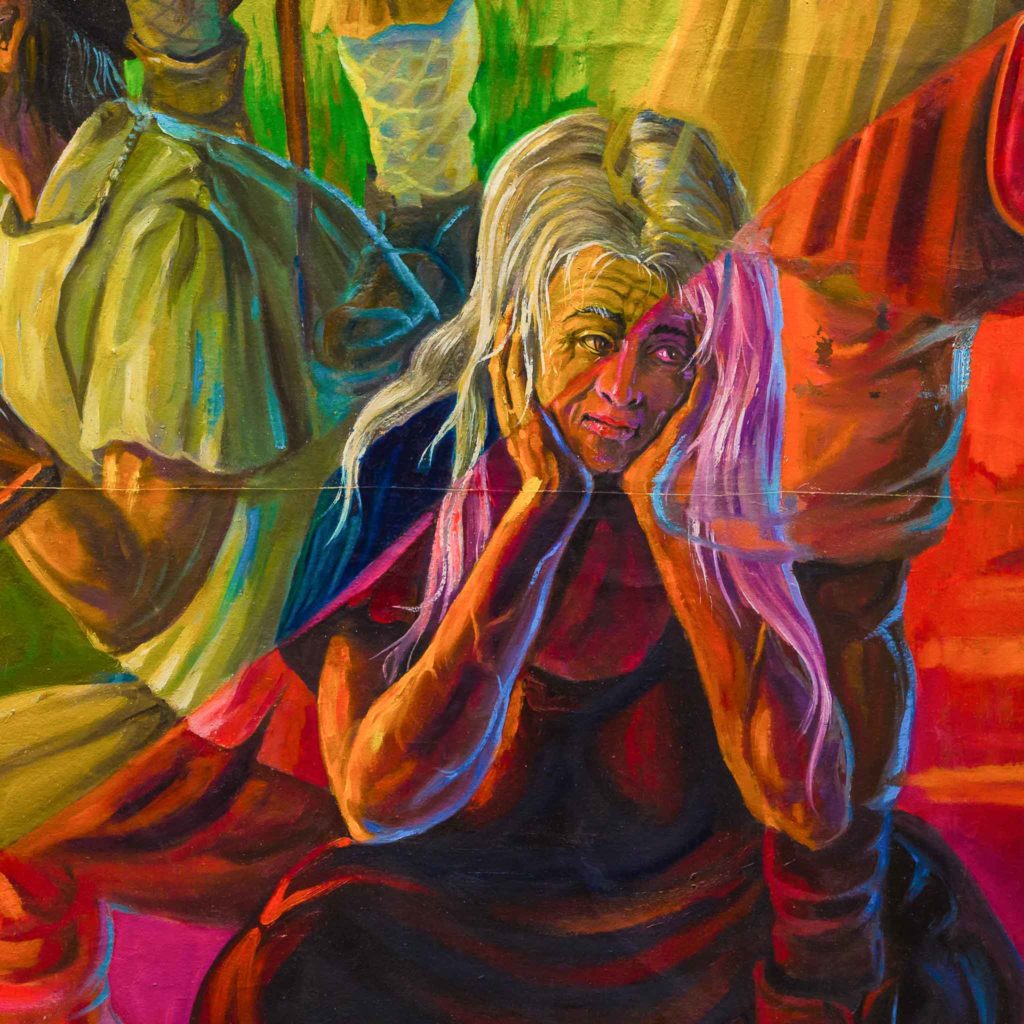 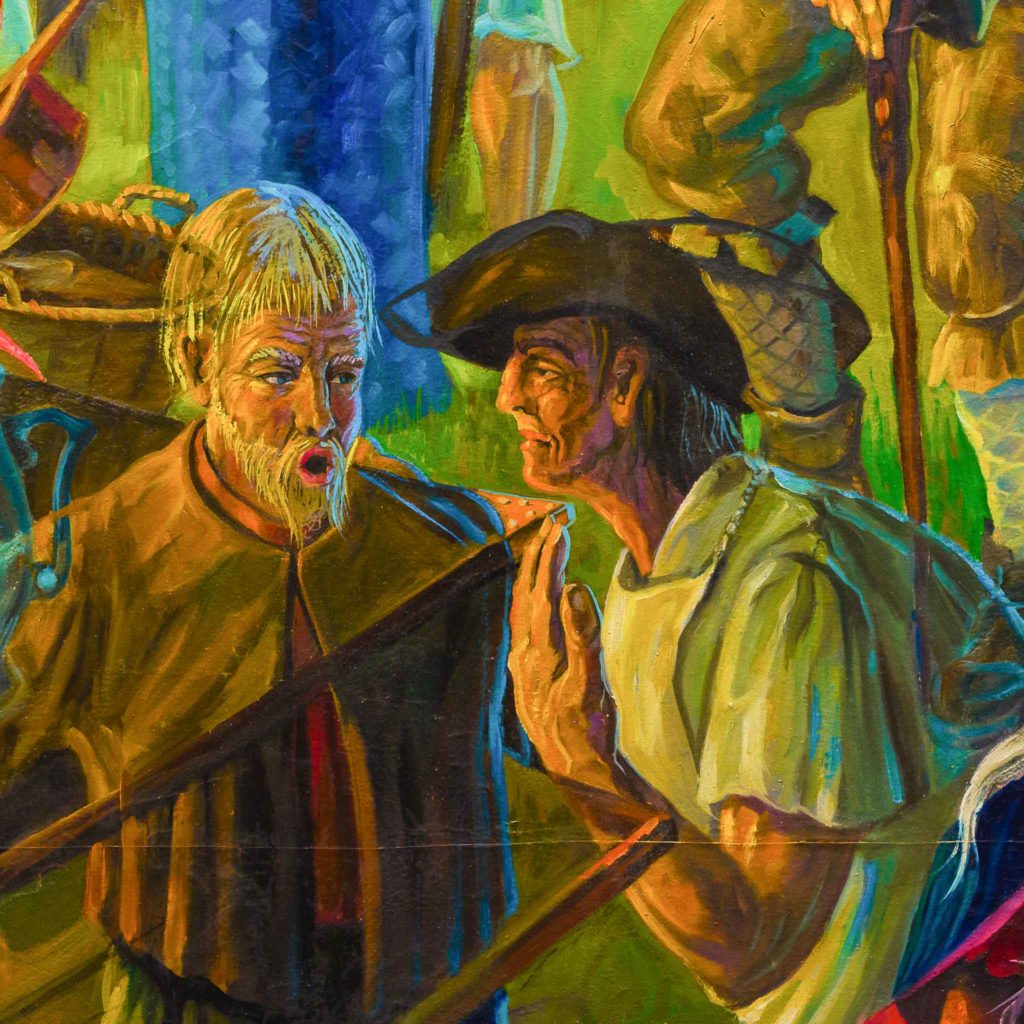 Ladies born into nobility had maids and servants. Noblewomen were legally permitted to wear fashionable dresses with ruffles and lace and pointed shoes, according to their status. Under the law—and the threat of beating or imprisonment—peasant women were required to wear a particular type of clothing, signifying their low status. Yet, even women of nobility were viewed as property of their husbands and most could not own land. Neither peasants nor women of nobility were taught to read or write outside of the few at the very top of nobility.  Although there were some differences for women depending on their social status, childbirth was an equalizer, since one out of twenty women died from complications during childbirth.  Moreover, since their husbands were military men, women of nobility spent little time with their husbands.

In some sense, the peasant women had more freedom, provided their husbands or fathers were  benevolent-hearted people.  They worked alongside their husbands, planting, harvesting, and caring for the land and the animals. And they bore children.  If a woman survived childbirth— one in twenty women did not survive—her child had only a 50 percent chance of living past twelve years of age. This was the reality of life.

Aristocratic women such as Hildegard Bingen had the option of entering an abbey and taking the vow of a nun, a luxury available only for those wealthy enough to pay the costs of rent or land to the abbey. Yet, it was the one place a girl could learn to read and write—they could not choose both love and literacy—and it was an option envied by many women. At times, young girls were left at the abbey to be raised by nuns, against the child’s wishes, of course. Elizabeth Dirks is an example of such a child left at the abbey by her widowed father.  While the nuns mostly treated her with kindness, she was imprisoned for nine months as a teenager when caught reading scripture on her own.   After her release, Elizabeth escaped from the abbey by dressing as a milkmaid.  What must life be like if becoming a nun was the best life possible?

The nobility and church rulers demanded increasingly heavy taxes and tithes, which were used for building castles and cathedrals while the peasants went hungry. At times, food the peasants were required to pay sat in storehouses where it rotted or was eaten by rats.  Additionally, waves of the bubonic plague swept across Europe from 1348 through the 1800s.  In the first four years, nearly one-third of the population died. From this harsh existence, riddled with hunger and disease and poverty, the Peasant Wars of the 1520s broke out as the people rebelled against the system.  Yet, there were changes in the air.

The use of the printing press was blowing a fresh wind. It allowed ideas, such as the reformers were advocating, to be preserved and rapidly spread throughout the Holy Roman Empire.  This wind picked up velocity when Luther translated the scriptures into the German language.  For the first time in 1,200 years, people were hearing the scripture and Truth in their own language. Like people starved and with no water for a long duration of time, they gathered for Bible studies, drawing a new kind of strength from the words, and women were deeply involved.

One-third of all martyr accounts in the Martyr’s Mirror are of women.  In the region of Tirol, Austria, two-thirds of all Anabaptist participants in civil records were women.  That we have these court records is remarkable, considering women were not to speak in court. When arrests began happening for re-baptism, it was ruled that since these women had requested adult baptism by their own mouth, by their own mouth they would need to testify before the court.  This ruling is the reason we have their voices today—it tells us the importance of their actions, both for them and for their world.  If the ruling was intended to demean women, it instead elevated those formerly at the lowest rung of society and provided a space for their voices to be heard.

The voices and actions of the women we will be hearing from in the coming months stand as a monument. They reveal to us the tremendous force of both the push and the pull these women faced. The push of desperation to escape the centuries of oppression for something better. The fantastic and liberating pull at discovering a Truth that set them free. That these women would endure terrible persecution and torture of their physical bodies even to the point of death tells us how heavy were the chains of oppression that otherwise bound them. They began acting on what they long felt; that women were not children, and God was not a tyrant.

As they cast off the shackle of lies they had long been told and had themselves believed, they burst into the freedom of Truth.  Truth that individuals are formed in the image of God and thus worthy of respect.  Truth that every person is created with a voice and agency to choose between faith and unfaith. Being thus created and freely choosing for faith freed their minds from the inner constraints that bound their souls and bodies more surely than any outer force.  Grasping this Truth set them free to live differently in their real lives and nothing in the world, no torture or persecution, not even physical death, could persuade them to return to the former imprisonment of the inner shackles. They had seen the light, and nothing in this world could stop them.

If you wish to hear more historical stories like this, please call or visit the Amish & Mennonite Heritage Center. We offer guided tours of “Behalt” – a 10 ft. x 265 ft. cyclorama oil-on-canvas painting that illustrates the heritage of the Amish and Mennonite people from their beginnings in Zurich, Switzerland, to the present day. Behalt means “to keep” or “remember.” Hours:  Mon-Sat 9:00-5:00. Location: 5798 County Road 77, Millersburg, OH 44654 (near Berlin). Please call (330) 893-3192 for more information or to schedule a tour.