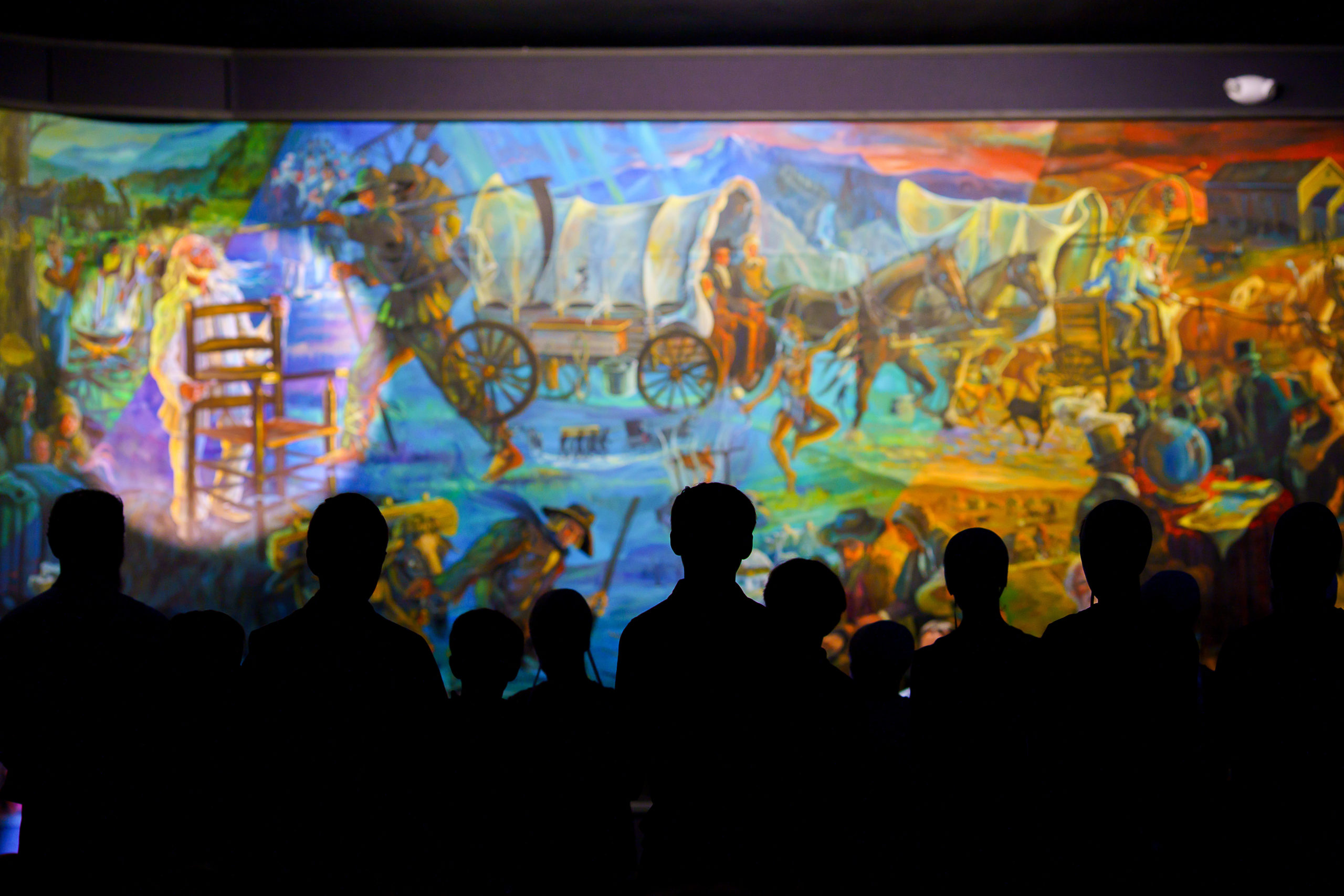 Art is often viewed as personal, and beauty is found only in the “eye of the beholder.” While there are elements of truth to that, art often conveys much more than that. Art often allows the person engaging with it to experience the world of the artist. That is the case of two unique pieces of art found in the middle of the Holmes County Amish community. Both pieces of work were done by a German-Canadian artist named Heinz Gaugal.

The first piece is an oil on canvas painting that is ten feet high and 265 feet long! It is known as Behalt (German: to keep, hold, or remember). This mural painting is unique for both its size and its content. The second piece is entitled Immigration and is a unique medium and for its size and location. This piece is known as a Sgraﬃto (from the Italian) [zgraf’ﬁ:to]. It is 22 feet high and 34 feet wide and is located at the end of the building that houses the Behalt painting. Sgraffitt is produced by applying layers of plaster tinted in contrasting colors to a moistened surface. It is most often seen in small-scale work like pottery and rarely as a part of the building. In fact, we are not aware of another Sgraffito on this scale in the United States.

In 1962, a German-born immigrant to Canada named Heinz Gaugel entered Holmes County, Ohio, for the first time. Heinz was an artist by trade, and he had come to Holmes County in search of some glazed bricks for an art project he was working on in Fonthill, Ontario. Heinz became fascinated with the Amish because they spoke a German dialect similar to his own and lived a unique lifestyle. Heinz also felt a common bond with the Amish because of their strong belief in non-resistance. Heinz had been drafted into Hitler’s army in 1944 at the age of 17 and sent to the Western Front after only a few weeks of training. He was part of a unit that was “sacrificed” by being thrown into a fake attack to draw fire away from the main troops. Almost his entire unit was shot to death; more died in the hospital. Heinz himself was shot in the head and chest with near-fatal wounds and spent about a year in a U.S. prison camp in France. Through this experience, Heinz realized the horror and futility of war, and he too became a pacifist. He immigrated to Canada in 1951.

When Heinz completed his project in Canada, he moved onto an Amish-owned farm in Holmes County in 1972. Two local businessmen had invited Heinz to come and help create a theme park. While the scheme never materialized, Heinz continued living on the farm for another eight years.

Tourism in Holmes County continued to increase, causing some members of the Amish faith much frustration. On a warm summer day in 1978, an Amish blacksmith relayed to Heinz his frustration with tourists. Their constant questions and unwanted picture-taking interrupted his work, and he wasn’t always able to provide an answer to their probing questions. “I wish there was some place in the area that people could go and find out about why we live the way we do,” the blacksmith relayed to Heinz. “Brother,” said Heinz, “tomorrow I will begin working towards that.”

Heinz committed himself to painting a cyclorama depicting the history of the Anabaptists and engaged in painstaking historical research towards that end. Heinz’s commitment to the project would see him through several serious challenges, which might have defeated many others. However, his determination proved to be stronger and is reflective of the same perseverance that Anabaptists displayed in remaining true to their convictions.

After securing a sponsor for the project, Heinz began to paint in 1978. A small church located on top of Bunker Hill was rented where Heinz continued painting from 1978 to 1980. Many local Holmes County, Ohio, people will remember the old Brethren church in the fork of Routes 62 and 77 just south of the cheese house. This white-sided frame building was the first space that would house the mural. Since that time, the building was removed, and a modern intersection with a traffic light is now there.

While Heinz was doing some research in Europe in 1979, Heinz’s sponsor passed away. The ownership of the painting, with 55 feet of it complete, was disputed. The painting was confiscated by the Holmes County Sheriff and held in the Holmes County Jail for about one year. After settling the dispute, Heinz received the painting back. For a short while in 1981, the painting was displayed at Martin’s Creek Mennonite Church. But Heinz soon packed up the painting and shipped it to Intercourse, Pennsylvania, where he hoped to finish the work. In Pennsylvania, a new sponsor was found and had space rented in an old building.

As the painting made its way to Pennsylvania, tragedy struck: Heinz experienced two debilitating and painful heart attacks within a two-week period. He spent half a year recuperating in an Ohio hospital. Heinz eventually made it to Intercourse and opened the painting to visitors. At first, a $1.00 fee was charged to view the painting; later, donations were asked for. Still, not enough revenue was generated to keep the project alive. Behind in rent monies, the building owner museum confiscated the mural and other paintings of Heinz’s as security. After a four-month court battle, the mural and paintings were returned to Heinz. Two non-Anabaptist businessmen in Intercourse appreciated Heinz’s work so much that they paid the $1,500 back rent so that the mural would be returned to Heinz.

We will leave the Behalt painting in Lancaster County for now. Next month we will find out how it moved back to Ohio where a building was built to house both the painting and then the Sgraffito on the outside. As one can imagine, the space to house a painting of this magnitude needed to be unique and well–build to display and protect this valuable treasure that speaks to the world in a medium that all can understand.

Like our own lives, Behalt has been on a journey. First in the mind of the artist and then in physical form, as it moved between the two largest communities of Amish in our world. We will also discover how a work of art can move people as they engage with the experience of viewing and hearing the story of God’s grace in history.

If you wish to hear more historical stories like this or see the Mural and Sgraffitto please call or visit the Amish & Mennonite Heritage Center. We offer guided tours of “Behalt” – a 10 ft. x 265 ft. cyclorama oil-on-canvas painting that illustrates the heritage of the Amish and Mennonite people from their Anabaptist beginnings in Zurich, Switzerland, to the present day. Behalt means “to keep” or “remember.” We are open Mon-Sat 9:00-5:00 and are located near Berlin, you can find us at 5798 County Road 77, Millersburg, OH 44654. Please call (330) 893-3192 for more information or to schedule a day or evening group tour.