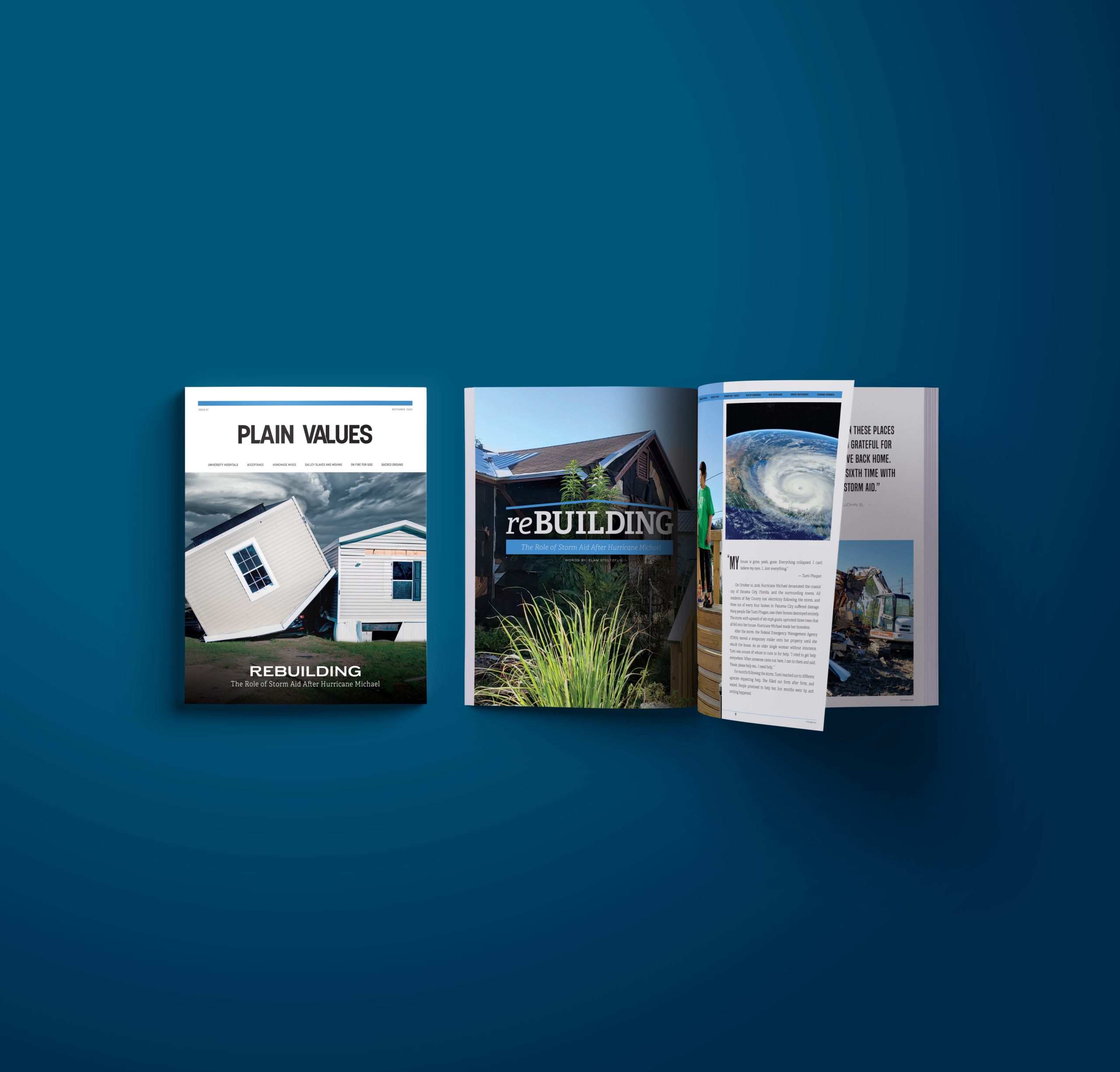 Rebuilding: The Role of Storm Aid After Hurricane Michael

“My house is gone, yeah, gone. Everything collapsed. I can’t believe my eyes. I… lost everything.”

On October 10, 2018, Hurricane Michael devastated the coastal city of Panama City, Florida, and the surrounding towns. All residents of Bay County lost electricity following the storm, and three out of every four homes in Panama City suffered damage. Many people, like Tumi Phagan, saw their homes destroyed entirely. The storm, with upward of 160 mph gusts, uprooted three trees that all fell onto her house. Hurricane Michael made her homeless.

After the storm, the Federal Emergency Management Agency (FEMA) moved a temporary trailer onto her property until she rebuilt the house. As an older single woman without insurance, Tumi was unsure of whom to turn to for help. “I tried to get help everywhere. When someone came out here, I ran to them and said, ‘Please, please help me… I need help.’ ”

For months following the storm, Tumi reached out to different agencies requesting help. She filled out form after form, and waited. People promised to help her, but months went by, and nothing happened.

“I’ve been in hurricanes ever since I’ve been in Panama City,” said Katie North. “This is where I have lived and never left at all. We stayed right here… it started blowing off at the top of the house, and it just was awful… The roof came off, you could see right through the attic out there. Then it blew through, it just took the whole roof and she took everything with it and it was scary… you could just hear everything just slam and bangin’. It was scary. It’s just hard for me.”

Katie North sustained injuries during the storm and was airlifted to the nearby hospital in Destin. When she returned home after her hospital stay, she looked at the wreckage: her home was completely destroyed. Katie’s family has lived in Panama City for generations, and now her family home was gone. An older woman in her seventies, Katie wanted to rebuild a house on the property for future generations of the family, but she did not have the money to do so.

In the months following the hurricane, many different organizations came into the area to help with the rebuilding effort. The relief organization of the United Methodist Church, the United Methodist Committee on Relief (UMCOR), played a vital role in coordinating with other Christian relief organizations. One such organization was the Mennonite Disaster Service (MDS), a volunteer network of Anabaptist churches that responds in Christian love to those affected by disasters in Canada and the United States. Along with working to restore broken communities, they also seek to restore lives by nurturing faith, hope, and wholeness.

Storm Aid is a group of Old Order Amish and Old Order Mennonite volunteers from Lancaster County, Pennsylvania, and surrounding areas. Among these communities, there are many people skilled in the crafts needed to build homes: carpenters, general contractors, roofers, drywall installers, and painters.

Since Hurricane Michael affected such a large area, MDS placed volunteers all across the northwest Florida region. For Panama City and Bay County, MDS recruited volunteers from Storm Aid to help with the rebuilding efforts, specifically the construction of new houses to replace those that were destroyed.

In order to do work in Panama City, MDS/Storm Aid knew they needed an operations center. According to Dan Yoder, regional volunteer coordinator for MDS, “One of the critical things was finding a place for MDS/Storm Aid to set up a base.” MDS volunteer Steve Campbell and Storm Aid volunteers Ivan Shirk, Eli Stoltzfus (Cherry Hill), and Nathan King checked out multiple sites, but nothing met the requirements they had for an ops center. Then, someone told them they should check out a place called Heritage House Ministries. Steve found the location—ten miles north of downtown Panama City, alongside Highway 231—and drove to the site.

Sandy Hathaway, founder of Heritage House Ministries, recounts her first meeting with the volunteers: “In late summer of 2019, four strangers knocked on my door. They were representing MDS, a Mennonite group of disaster-relief workers who specialize in repairing and rebuilding homes. They were looking for a place to park some trailers so they could begin to accommodate teams coming down from all parts of the country to help the people of Bay County. Someone had told them about Heritage House Ministries. Within a few minutes, I knew the Holy Spirit was in the meeting, and Edwin and I decided to accommodate them… We certainly share a love of Christ and a heart to help others.” 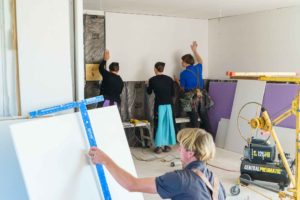 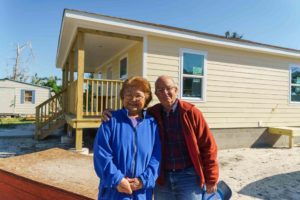 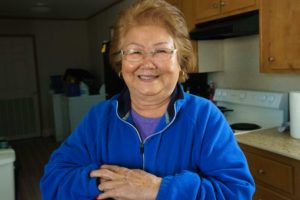 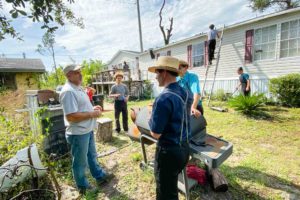 Sandy and Edwin Hathaway permitted MDS/Storm Aid to use their property as an operations base rent-free for nine months. They also agreed that the volunteer organizations could set up dorm trailers and a tool container and park their vehicles on-site. Now that MDS/Storm Aid knew they had an operations base established, they turned to their next challenge: logistics. Darin Bontrager, MDS Regional Operations Coordinator, commented, “How was this going to work, who was at the table, how much networking do we need to do, is this long term or short term, etc.?” There were still many questions to be answered.

UMCOR had identified thirty locations for new houses to be built. They asked Storm Aid to work out an estimate of costs per house. Storm Aid came up with an estimated cost of around $63,000 per house and submitted their budget. UMCOR then laid the groundwork in Panama City for the Storm Aid volunteers: communicating with homeowners, coordinating with FEMA, deed verification, and other pre-construction work. By the fall of 2019, UMCOR provided Storm Aid with enough funds to purchase material for ten houses, and Storm Aid got to work. The first house they built was for Katie North.

“Every time I talked with her, there were tears of joy, happiness that these people were coming to build a house for her,” said Dan Yoder. On February 21st, 2020, the new house was dedicated to the North family. Handing over the keys to the house was a group of MDS/Storm Aid volunteers who were rejoicing with the North family.

At the same time, Tumi Phagan heard that UMCOR was building homes for people. She reached out to them, and they sent a Storm Aid team to build her a new house. After she received the good news, Tumi called her daughter and told her, “I’m getting a house. I can’t believe this; I have waited so long.”

From her FEMA trailer, Tumi watched the Storm Aid volunteers work and could hardly believe her eyes. “These people worked so hard,” Tumi explained. “I need to feed them. I make food and buy food, bring pizza. But they are so busy they don’t take time to eat much. The house is almost finished now. I keep an eye on them. The volunteers are so happy as they work. I heard them sing while working; nobody sings while working these days. Right now I’m so happy, so happy. I’m very happy.”

Storm Aid finished Tumi’s house in March and gave her the keys to her new home. At the dedication ceremony on March 13, MDS and Storm Aid volunteers were there to celebrate with her. 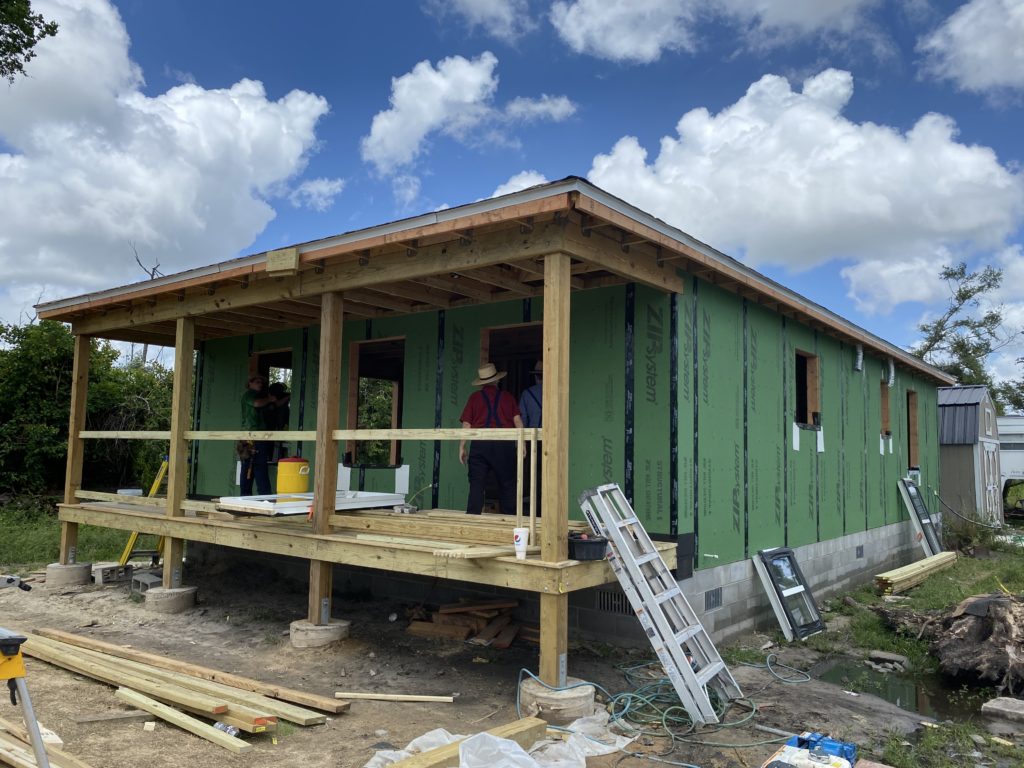 For volunteers with Storm Aid, this was a life-changing experience. Eli Stoltzfus (Cherry Hill) is the project coordinator for Storm Aid’s house-building work in Bay County, and he offered his reflection on his time spent volunteering. “I first heard about MDS/Storm Aid through my youth group. When you go once, you will go again and again. Through these trips, I have made many lifetime friends. I was in Texas for a while last year—this is my tenth time with MDS/Storm Aid.

“I enjoy the orientation, teaching people to be sensitive to the community and homeowner’s needs. I especially like the sharing nights after a long day’s work. This can be emotional, listening to homeowners’ stories and talk about folks we met. We serve homeowners in these communities with no insurance and low income and work with the elderly. I am thankful that I can help others. One highlight of the dedication event is when the keys are handed to the owners.”

Ben and Barb Esh served as house parents at the MDS/Storm Aid facility at Heritage House Ministries, and their volunteering also made an impact on their lives. “These are new experiences; the work here makes us feel needed. There is so much to do here. We listen to the homeowners tell their tragic stories about the storm; sometimes they were taken advantage of and treated unfairly. We are glad we can help to make a difference.”

“This is Diane Kyser’s new house Storm Aid is framing. She was in bed when the storm hit. She already has been through seven hurricanes in her life. This one was the worst. She lived in a trailer she shared with her daughter and her husband. She had just got out of her bed and walked away ten feet when the biggest tree on the property came crashing down through the trailer onto the bed she just got out of.

“So she and her daughter and son-in-law got in the car and drive out of town. But they don’t get very far. A tree blows down across the road right in front of them. And so they turn around to go back to see if the house is all right. They dodge trees on the way back. They get back, and their house is destroyed by a few more trees that fell down on it. She is convinced the Lord still has a purpose for her in life. Her strong faith is encouraging.

“They have been living in two sheds with a portable shower outside and only an electric cord running the shed for power. The only toilet is the one in a camper.

“I tell her she was very patient. She said she cannot understand this; she worked hard all her life and now lives in a shed. She was very happy to see Marlin’s crew build the new house walls. When her daughter came home from work, she cried for joy at the sight of their new house being built.” 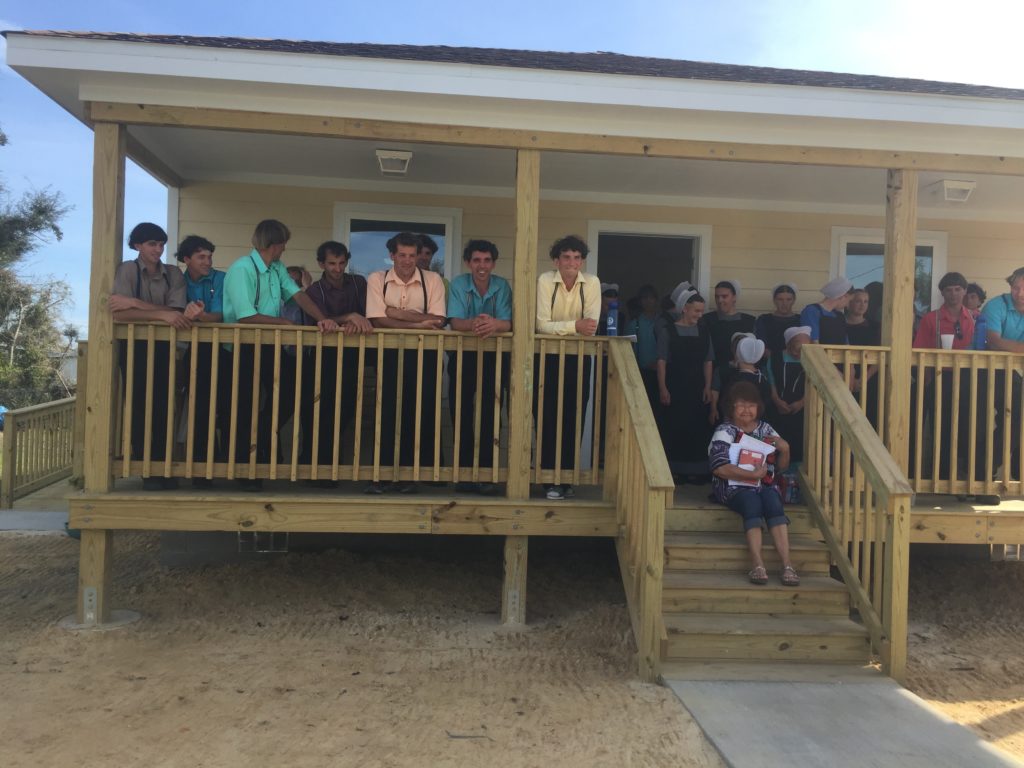 After a two-month complete shutdown in March and April, volunteers were able to come back and complete projects that had not been completed. To date, the partnership of UMCOR, MDS/Storm, the Hathaways, along with other supporting partners, has completed fifteen new houses and twenty-six repairs and renovations.

Storm Aid will be continuing their work in Panama City this fall. You have an opportunity to share your values with others, especially those who are homeless and in need. If you are interested in volunteering, please call.