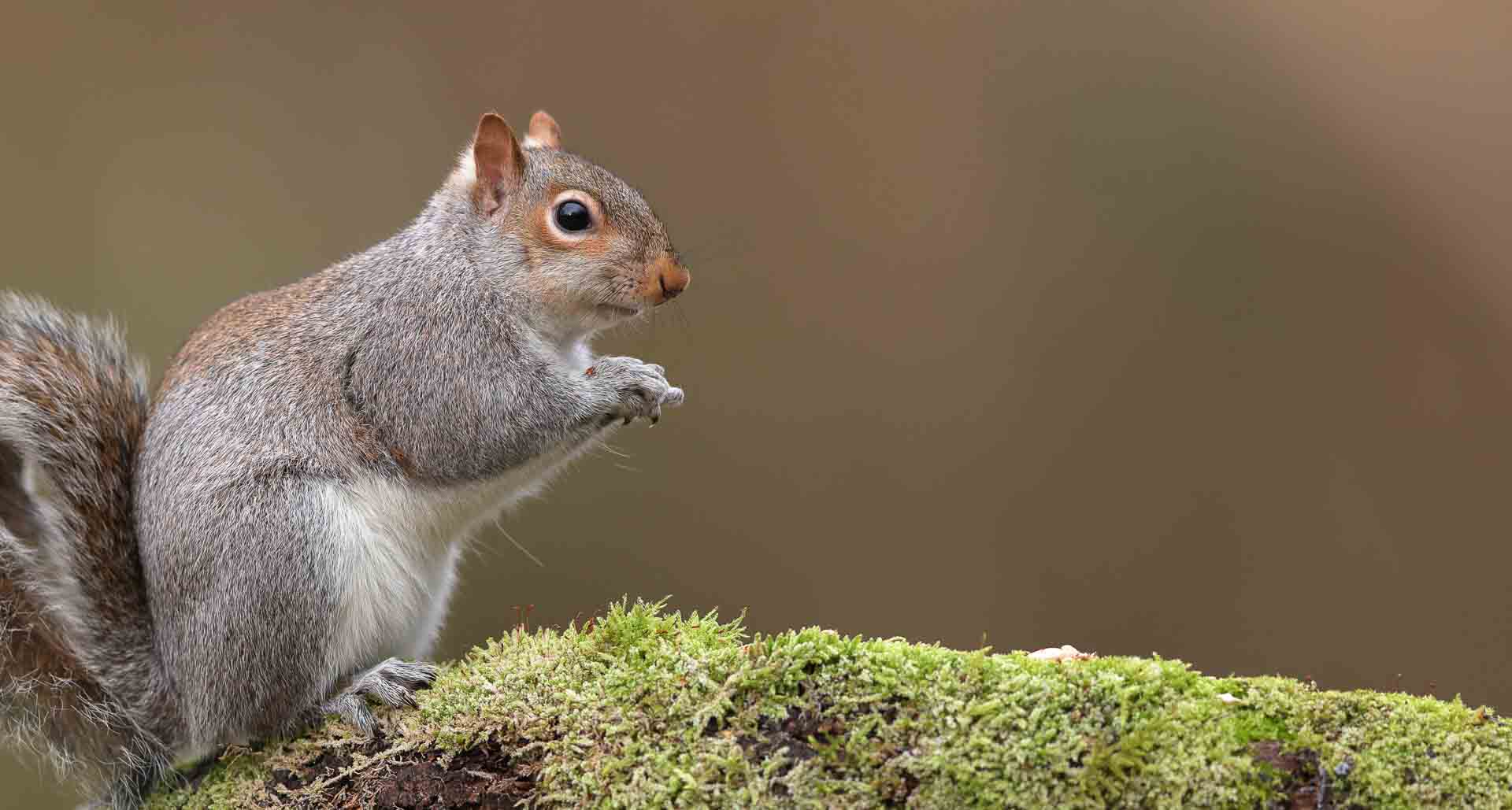 My earliest hunting memories involved trips with my Dad, uncles, grandfather, and cousins. At first, I was too young to hunt, and I couldn’t wait to be old enough where I could carry my own gun. An open-sighted .22 rifle was my gun of choice, and squirrels were my favorite quarry. Since the gun didn’t have a scope to allow me to draw an accurate bead, I had to wait until I got close enough to a bushytail (as they’re commonly called), and it remained still. Sometimes that was easier said than done!

When you consider squirrels in general, you think about the critters with bushy tails that spend much time in trees. But in reality, there are many animals in the very large family of squirrels, such as chipmunks, ground squirrels, prairie dogs, even woodchucks and western marmots, among others. But since I’m referring to squirrels that we hunt in trees, there are three main subspecies: gray, red, and fox squirrels. Sizewise the fox squirrel is biggest, weighing up to 2 1/2 pounds, followed by the gray that weighs almost 1 1/2 pounds, and then the red that tips the scales at about a half a pound or more.

Years ago, squirrel hunting had a huge following, but things have changed. Hunting statistics show that far fewer hunters go afield for a variety of reasons. The number of hunters in the US has been dropping in recent years, not only for squirrels, but other species as well. One of the reasons is the fact that more and more properties are being posted by folks moving into rural areas, resulting in less access for those who don’t own land. And, of course, more and more woodlands and farms are being converted to urban areas. So it’s a simple matter of not being able to hunt because you don’t have a place to go.

When I was a youngster, there were oak forests everywhere in and around our town. Now, my favorite hunting spots are unrecognizable, having been taken over by malls, suburban neighborhoods, and other aspects of civilization. In those days gone by, squirrel hunting was as easy as taking a walk in my backyard or riding my bicycle a short distance. 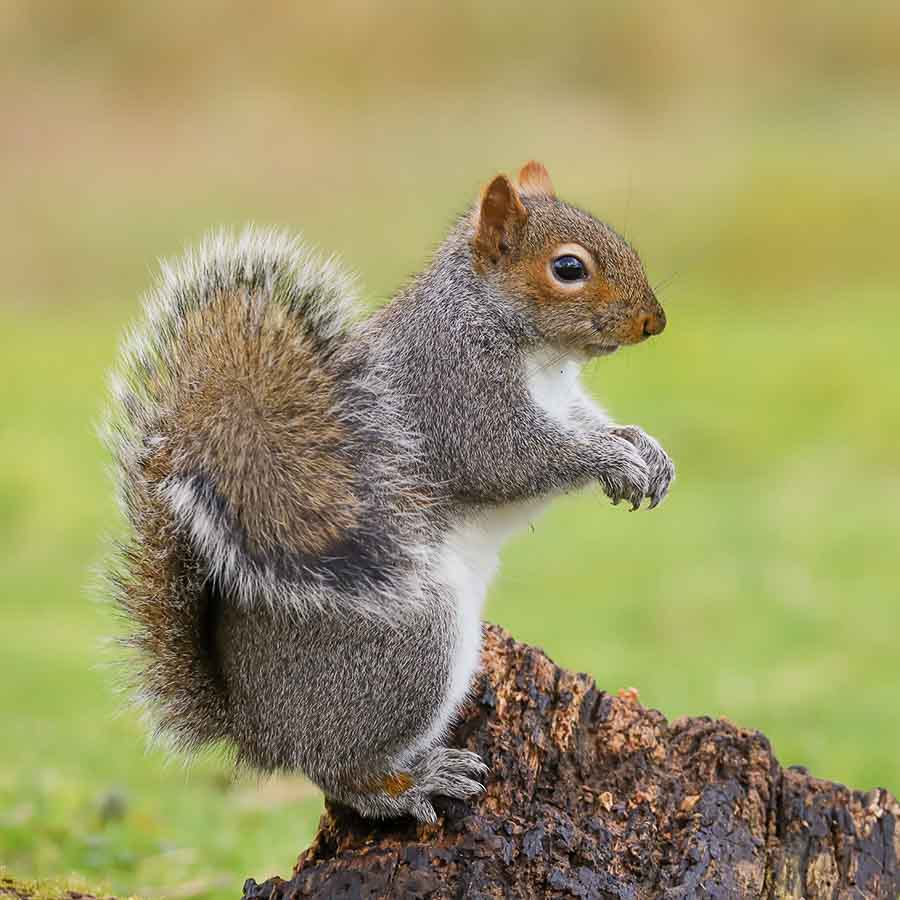 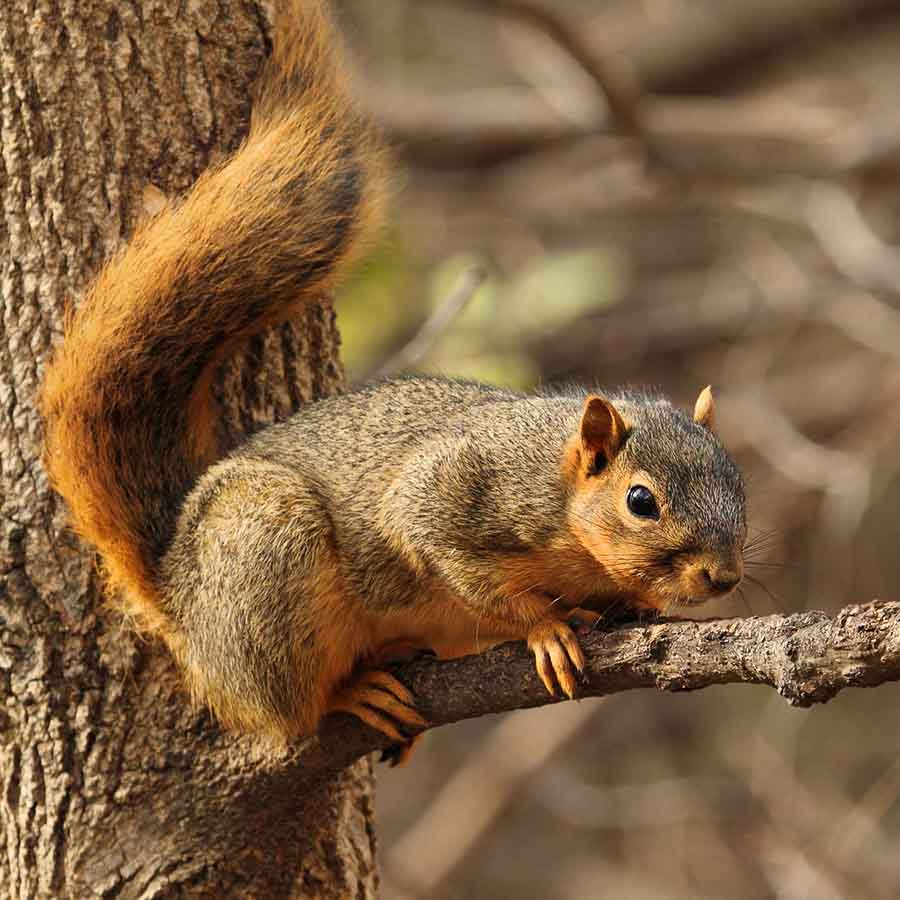 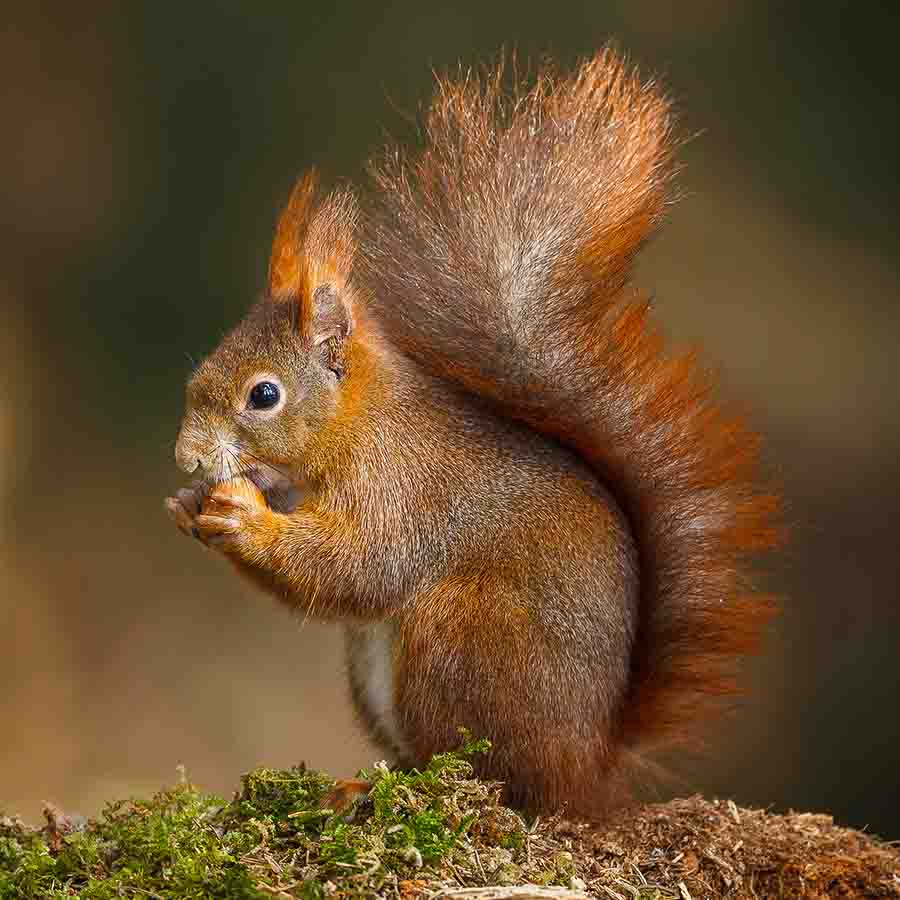 My fondest memory of my earliest hunting experiences was an adventure with my dad. I was too young to hunt, and I tagged along after him. He was hunting squirrels on a woodlot on a friend’s farm. The trees were tall oaks some 70-80 feet high. We eased along slowly, and suddenly my dad stopped and stared at something far up in a tree. He whispered that there was a squirrel up there, but I couldn’t see it. We had no binoculars. He aimed the open-sighted .22, squeezed the trigger, and I was amazed when a squirrel plummeted to the ground, hit squarely in the head. I was so proud of my dad! That was an incredible shot.

As I grew older, I hunted squirrels every chance I could. They were gray squirrels, which were the primary subspecies in upstate New York where I grew up. There were a few red squirrels but no fox squirrels. In the early season I learned that spotting the quarry in trees that were still bearing leaves was a tough proposition. So I switched to a shotgun. That way I could shoot at a squirrel dashing along a branch or leaping wildly from tree to tree. Sometimes a wounded squirrel would escape into one of the many stone walls that were abundant where we hunted. When that happened, my buddy took up a ready position with his shotgun, and I carefully removed the stones one by one. Eventually, the squirrel would dart out and my pal would shoot. Sometimes we’d find the squirrel dead in the wall. We’d always replace the rocks as best we could, even though the walls were built by early pioneers and were now no longer of any use.

Squirrels are champion hoarders. They work hard all summer and fall to store food for later winter use. They collect acorns, hickory nuts, walnuts, and all sorts of other nuts, as well as pine cones. They deposit their bounty in a place called a midden, usually centrally located within their territory. I’ve seen middens larger around than my pickup truck and a foot or more deep. In the northern states, hardwood trees are bare, offering no food to squirrels. That’s when they head for the midden and dig up their meal, often under deep snow.

Red squirrels are also called pine squirrels. They prefer living in evergreen forests, and they are fond of the seeds in pine cones. I have two big Douglas fir trees next to my house. In late summer, I always hear loud noises on my roof as red squirrels scurry around dropping cones on my house. Then they pick up each cone and bounce off to their midden in the surrounding woods.

The big fox squirrel is found in many parts of the country. I never saw one when I was a youngster, and it wasn’t until I hunted on a buddy’s farm in Iowa when I got my first one. I’ve since hunted them in various midwest and southern states, and they’re my favorite of the three because they’re a bit easier to see up in the tree and offer more wonderful meat.

There are also black-colored squirrels which are melanistic varieties of gray squirrels. There are places where most of the squirrels you see are black.

Squirrel hunting strategies depend on many factors, including the time of year, amount of underbrush, weather conditions, and the type of firearm used. It’s said that the best way for a person to learn to hunt big game is to take up squirrel hunting. You can learn all the elements of hunting deer when you’re pursuing squirrels. For example, you must be able to spot the quarry hiding high up a tree, using binoculars to search every part of the tree. You might see a tuft of hair from its tail, ears, or other parts of the body. This is excellent training and will help you spot part of a deer in the woods later on.

Once you’ve spotted the squirrel, you must be able to hit it. If you’re using a scope sighted .22, you need to position yourself under the tree so you can hit the head. Many times a squirrel will lay flat on the opposite side of where you’re standing. As you move around the tree, it will invariably slip around to the other side, and you’ll play that game until the squirrel makes a mistake or decides to quit and dashes away. Hunting with a buddy eliminates this merry-go-round. Each one of you stands on opposite sides of the tree. Another way if you’re alone is to tie a string to a sapling on the other side of the tree. Get ready to shoot, and jerk on the string several times. The sapling will thrash around noisily, and the squirrel will be confused, thinking danger is on his side, and scurry around to your side. The ability to hit a squirrel under such trying conditions will help your marksmanship abilities when you’re hunting deer.

Stalking quietly is also a strategy that’s required in both squirrel and deer hunting. You teach yourself how to slip along quietly on the forest floor toward a squirrel you’ve spotted in a tree. This is extremely important in the deer woods. Here’s a tip. If hickory trees share the woods with other species, be aware that their leaves turn yellow before oaks and most other trees. Squirrels will commonly seek out hickory nuts before acorns, and chances are good you’ll spot bushytails in those obvious beacons in the forest. Stalk each tree very carefully.

Another necessity is listening. You must be able to hear a squirrel scampering in the leaves, or hear it chatter high in the trees, and even hear the pieces of nut husks falling when the squirrel is feeding. That really takes some doing and works only on calm days when the wind isn’t blowing.

Patience is another requirement, coupled with the need to sit or stand in places where you’re apt to see squirrels, and waiting for long periods of time. You need to do this if you’re deer hunting, too, even if you use trail cams to help you actually see deer as well as learning the trails they use. One of my favorite squirrel spots was a huge white oak tree visited by many squirrels, not only for its acorns but because it had several holes in the trunk used as dens by squirrels. I recall a couple of times I shot a limit of five squirrels in that tree without repositioning myself. That brings up another point. Once you shoot a squirrel, make a note where it fell and continue sitting. If you don’t move, other squirrels will soon resume feeding, allowing you to shoot again.

Tracking a squirrel in the snow is also possible if the snow is very fresh (better yet if it’s still falling), and you can follow it through the woods. When you see the tracks end at a tree, the chances are excellent that the quarry is up in it, unless it scampered away through the treetops to another location. Obviously if the snow is old, there will be tracks everywhere, making it impossible to single one out and follow it. When I’m hunting in winter, I often wear snow camo to help me blend in with the winter woods, especially if I intend to sit quietly and wait for squirrels to appear.

Hunting with dogs is popular in some areas, especially in the south and mountainous regions in the east. This requires a well-trained dog that will run loose through the woods, pick up the scent of a squirrel and follow it until it runs up a tree. The dog will then remain at the tree, barking to alert its master that the quarry is at hand.

Finally, squirrel meat is delectable. Unfortunately, some folks call them tree rats and would never attempt to eat them. That’s a bad rap that squirrels don’t deserve. They can be cooked in a variety of ways, with one of the most famous called Brunswick stew. This is a tomato-based stew that usually contains squirrel meat, lima beans, corn, and other veggies.

Whether you hunt squirrels on a balmy autumn day when the leaves are brilliantly colored or in the winter when the naked trees shiver in the white woods, you’ll be participating in one of America’s oldest activities. Squirrels are a serious quarry, and once you master the strategies, you’ll be ready for wary whitetails and have many wonderful squirrel dinners as well.

words by: Nic Stoltzfus _______________ “I want our magazine to encourage families to consider adoption and to support those who have adopted children with special needs.”   When Marlin Miller and his wife Lisa founded Plain Values ten years ago, the...

Roots + Wings with Rory Feek   Now that we've returned home from being out West and are back at the farm here in Tennessee, I’ve decided to take some time off… a year off, to be exact. Not a year off work, but off the internet. It may seem strange to write a...

Confessions of a Steward with Joel Salatin   With the average age of American farmers now at 60 years old, an unprecedented amount of farmland is becoming available, either for lease or purchase. Land grant universities that study the data universally agree that...