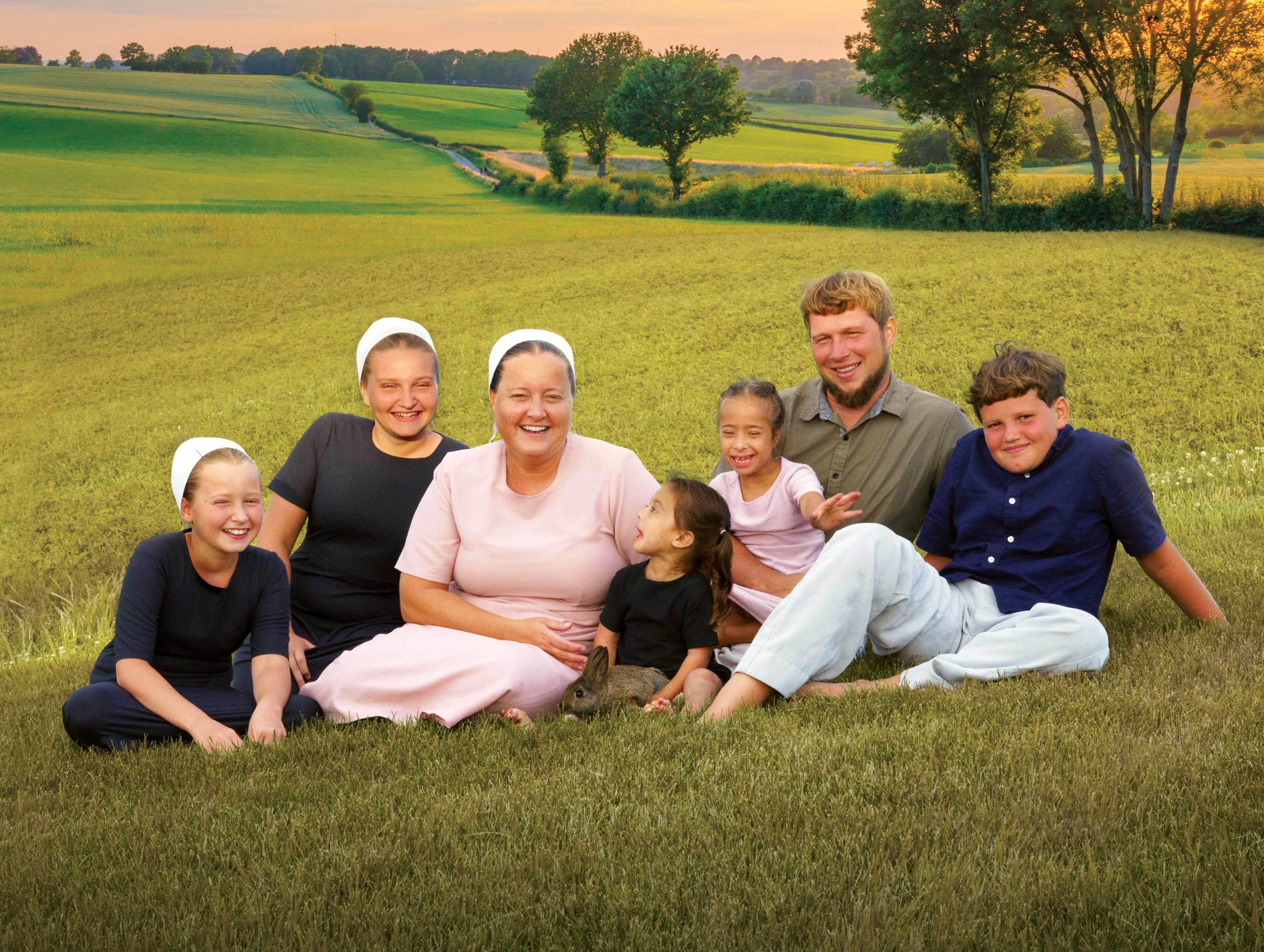 “I want our magazine to encourage families to consider adoption and to support those who have adopted children with special needs.”

When Marlin Miller and his wife Lisa founded Plain Values ten years ago, the magazine was built upon a foundation of three things: show Christian organizations doing good work worldwide, ascribe dignity to people with special needs, and promote the beauty of adoption. Two of those foundational stones interlocked—the Millers wanted to share stories of families who have adopted children with special needs.

Over the years, the magazine ran National Down Syndrome Adoption Network ads with photos of smiling children with Down syndrome and featured stories of special needs adoptions. Since the magazine’s founding in 2012, Marlin & Lisa Miller, Plain Values, and its associated non-profit Room to Bloom have helped with 14 adoptions.

This is one of those stories.

Keith & Lori Troyer and their four children, Seth, Ava, Josh, and Heather, of Shipshewana, Indiana, read Plain Values cover-to-cover  every month. Lori was drawn to the ads and stories featuring children with Down syndrome and would sometimes mention her desire to adopt to Keith. Keith wasn’t sure how he felt about it, but he certainly wasn’t chomping at the bit to adopt like Lori was. That all changed one evening when the family met C.J., an adorable little blond-haired boy with Down syndrome. At a social gathering of friends and family, C.J. quickly warmed up to Keith, effectively winning his heart. After that, the family often spoke of adding a child with Down syndrome to their family.

Unfortunately, in 2016 Keith broke his back while working at the roofing business he co-owns. Because of Keith’s surgery and long recovery, the Troyers temporarily set aside their dream of adopting.

At some point, the Troyers met Elliot, the son of Jay & Kristine Chupp, who also happens to have Down syndrome and was adopted. At the time, the two families knew each other, but not that well. Sometime later, the Troyers read the December 2019 Plain Values story featuring the Chupps’ adoption of Elliot. In the article, one quote from Jay stood out to the family: “We have been asked whether we would encourage other folks to adopt a child with Down syndrome. Our reply is that we would never talk anyone into a decision to adopt, nor condemn anyone who chooses not to. The decision to adopt should be a unanimous one, made by a team of three: God, husband, and wife. But simply put, we sure are glad we did!”

Lori connected with Lisa Miller, who began to send her information about adoption. They also started working on adoption paperwork and telling their friends of God’s call to adopt a child with Down syndrome.

In the meantime, Lori reached out to the adoption agency—KidsFirst Adoption of Indianapolis, Indiana—and connected with the founder, Inna Pecar. Inna is an immigrant from Ukraine who founded KidsFirst in 1990 with her husband, Steve. Both Inna and Steve bring a unique skill set to the organization: Inna has a Master’s degree in Education from Ukraine, as well as a Master’s in Social Work from Indiana University (IU); Steve’s degree from IU is in law, and he has over twenty years of experience in adoption law. Since the couple started KidsFirst over three decades ago, they have helped over 800 children find their forever homes.

Lori and Inna quickly hit it off. As they talked, the subject of a hosting program came up. Keith and Lori began looking into this and considered hosting orphans from overseas. In the meantime, one of Loris’ friends saw a Facebook post about a newborn girl in need of adoption just a few hours south of Indianapolis. Knowing that the Troyers were looking to adopt, Lori’s friend forwarded the information to her. It just so happened Inna was handling the little girl’s adoption.

Most infants diagnosed with this rare genetic disorder, Stüve-Wiedemman syndrome, don’t last past a year old.

When Lori reached out to Inna about adopting the baby girl, she told Lori that the infant had many complications and was diagnosed with Stüve-Wiedemman syndrome. According to the National Library of Medicine, “Stüve-Wiedemann syndrome is a severe condition characterized by bone abnormalities and dysfunction of the autonomic nervous system, which controls involuntary body processes such as the regulation of breathing rate and body temperature.” Most infants diagnosed with this rare genetic disorder don’t last past a year old. However, when the syndrome is diagnosed early enough, and infants are monitored closely, they have a better chance of living longer.

After reviewing the girl’s medical records and talking with her family about it, Lori told Inna, “Call us if she doesn’t get placed before Christmas.”

The Monday after Thanksgiving, Lori got a call from Inna.

“I’ve reached out to sixty families, and I’m down to two couples: you and an elderly couple.”

Inna explained to Lori that an infant with Stüve-Wiedemann requires intensive care, which could be overwhelming for an older couple. She thought the Troyers were the right fit for adopting the baby girl.

“Let me talk to my husband.”

Lori was in Pittsburgh Christmas shopping with her family, and Keith was back home working. She gave him a call, and they talked about what to do next: as much as their heart went out to this infant girl with special needs, they felt called to adopt a child with Down syndrome. The Troyers decided not to adopt this time around.

But as soon as she got off the phone with her husband, Lori felt her phone buzz and saw a text from him: let’s go get her.

Three days later, Lori made the three-hour drive south to Riley Hospital for Children in Indianapolis. Their now-close friends Jay and Kristin Chupp went along for support. In the NICU room, Lori held the baby girl for the first time. Her health was worse than she thought: every breath was a struggle, and she was covered in cords helping to keep her alive. Several weeks later, the Troyers brought her home on the Friday before Christmas.

The doctor told the Troyers that Elena’s prognosis was dim. He didn’t expect her to make it beyond New Year’s. Over Christmastime, the family kept a close watch on her. Her body struggled to regulate its temperature, and every breath was a battle. But Elena made it to the end of the year and continued to get better with each passing week. 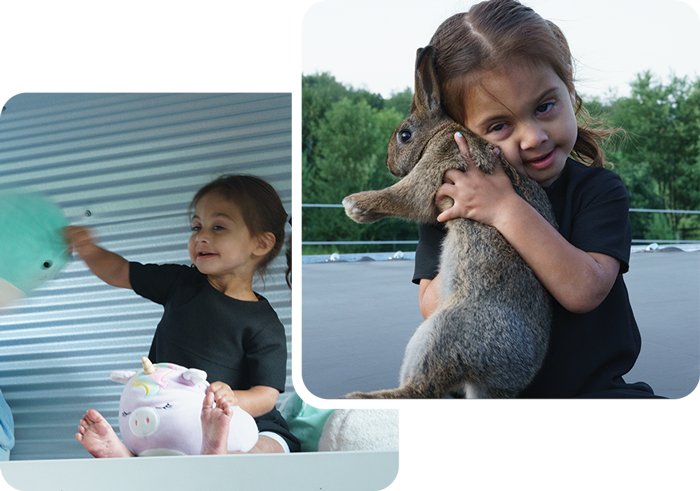 Her recovery did not happen overnight, but she no longer requires pediatric hospice or supplemental oxygen today. When I visited the Troyers earlier this year, I watched as this radiant two-year-old laughed and rolled around on their trampoline as she played with her pet bunny Flopsy, her smile as bright and joyful as the sun above.

Nic Stoltzfus is the editorial manager at Plain Values magazine. He and his wife Jen live in Reading, Pennsylvania, with their three crazy cats and rescue dog, Paul. They hope to have children soon! Nic loves volunteering in his community—he is teaching Sunday school next spring, is involved with the Schuylkill River Passenger Rail Authority’s plan to bring back passenger rail to Berks County, and he serves as secretary of the Nicholas Stoltzfus Homestead Preservation Committee. He is currently working on a novel about the immigrant Stoltzfus family.