Rediscovering the Ausbund – part one

Our family lived in Chester County, PA, when I was a child, and we attended the Old Order Amish services in our district. Our farm was two miles southeast of the town of Elverson, and I recall having church gatherings there. Preparing for this event meant a lot of work. I remember one service in particular—it was late spring after the first cutting of hay had been baled and stored in the dusty old hip roof barn. My Dad had recently built a new two-story chicken house on the hillside along Yoder Road. In the lower floor was a garage and storage area, perfect for church meetings. Everyone in the family helped get ready for church in the new chicken house. We brought bales of new hay to be scattered on the ground, and—after the bench wagon arrived—my brother Aaron and I set up the collection of worn wooden benches, neatly lined up in rows to seat the congregation for the morning service. The smell of old church benches mingled with the spicy scent of newly cut lumber and the aroma of fresh-cut hay.

Before the service started on Sunday morning, several of us boys were given the assignment to find the wooden box that held about sixty to ninety Ausbund hymn books.  As we walked and climbed over the benches, we strategically placed the hymn books on the benches so everyone would have a hymn book where they sat.

When the Sunday morning service started, the song leader announced the page number of the hymn from the Ausbund and began the song as the solo singer. The first song was chosen to match the given topic of the sermon; at other times it commemorated a particular season. The song leader began with a strong voice, belting out the first syllable in a tone of various notes, and then the entire group joined in the singing in a slow, almost dirge-like, chant. It took over ten minutes to finish the first song, and this was followed by the “Lob Lied,” which we sang every time our congregation met for church services.

After we sang these hymns, the preachers spoke, and testimonies and other announcements were given. After sitting on the hard, backless benches, the service concluded with one final Ausbund hymn. I had been sitting for hours, and I was glad to be given the task to go around the room with the other young boys, gather up the hymn books, and return them to the holding box. After we did this, the men quickly converted the benches to tables for the noon meal.

I recall getting into a bit of trouble after the service when a few of us young boys got the Ausbund song books and played with them like Lincoln logs or Legos. We built towers, bridges, and fences. When the elders caught us playing with the books, we had to return the books to the box. Little did I understand the importance of this song book. 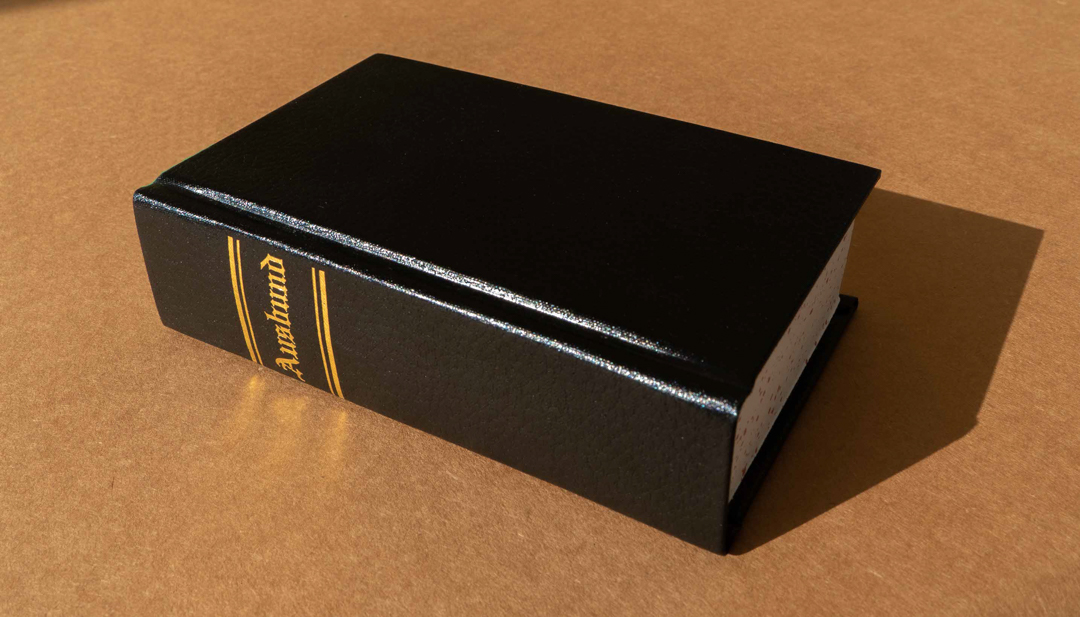 I attended the Amish church until I turned sixteen. My parents left the Old Order Amish, joined the Amish/Mennonite church, and moved to the Finger Lakes region of New York in 1977. At the time, there were only a handful of Amish/Mennonites in the area. I was restless and drifted further away from my Anabaptist heritage. The urge to travel was in my veins, and I became a musical troubadour of sorts, first traveling to sing with my brother Aaron and sisters Sarah and Ruth.  After that, I joined the Gospel Echoes and traveled cross-country for two years, singing and playing bass guitar.

In my late twenties, I found my way to the Deep South and married a Florida girl. We made our home there, and I went to college and started a media production company.  My films were mostly about nature and art; music became only a side interest.

The years passed by—my wife and I had two children. After he finished school, my son Nic came home to work with me. During one of our production trips, Nic started asking questions about my memories of growing up Amish. We both enjoy music, and he started asking about the songs of the Amish.  He asked what the songs mean and what they sounded like.  I began to remember and started to talk.

I told him about the “Lob Lied” that was sung at every Sunday morning service, and I began singing a few stanzas of the hymn.  Yes, it was long-dormant memory and my words were rusty, but I was able to recall the tune.   Nic listened intently. Then, like a typical Millennial, he asked, “Do you think the “Lob Lied” is on YouTube?”  I responded, “I doubt it.”  Imagine my surprise when Nic found a recording of the hymn on YouTube.  As Nic played the “Lob Lied” on his iPhone, I was stunned and mesmerized as sentimental memories came flooding back.  I sat there in silence for a while as tears flowed down my face. I recalled those moments of hearing the slow tunes of the Ausbund hymns, sitting on the old wooden benches, observing images of the elders and families of my heritage.  This was like a rebirth, a new beginning that renewed my interest in the songs of my childhood.

Soon after this event, I came into possession of an 1834 Ausbund. It belonged to a distant cousin, Raymond Smoker, and I inherited it after he passed away. The old hymn book was tattered; it had been wet at some point.  On the front page was fraktur of the original owner, “Dieses Lieder gehöret mir – Josua Smoker – 1896.”  I treasured that book for the childhood memories it evoked. I became curious about the Ausbund and began to scour the Internet, looking for more information about the book and its history.

Last year, my son Nic and I began a new project: a coffee-table book documenting the early history of the Stoltzfus family from 1624 to 1832. The ancestors of the immigrant Nicholas Stoltzfus were from Germany, so Nic and I made plans to travel there with Zach & Lucy Stoltzfus and Rose Beiler to do more research on our Stoltzfus ancestors. Since we were going to Germany anyway, I wanted to travel to Passau, where 52 of the Ausbund songs were composed in the Veste Oberhaus castle prison from 1535 to 1537. And so, that spring, I reached out to Eva Sattlegger, who is the curator of the Oberhausmuseum at Veste Oberhaus. She replied and said she’d be glad to show us around the castle. After I read Eva’s reply, I sat in contemplation. For over 30 years, I had left my heritage behind. And now these forgotten songs, that had lodged deep in my subconscious, had resurfaced. In a few weeks, my son Nic and I would be visiting the castle dungeon where the songs I had grown up signing were composed. What would we learn we visited Passau? Our trip to Germany couldn’t come soon enough.