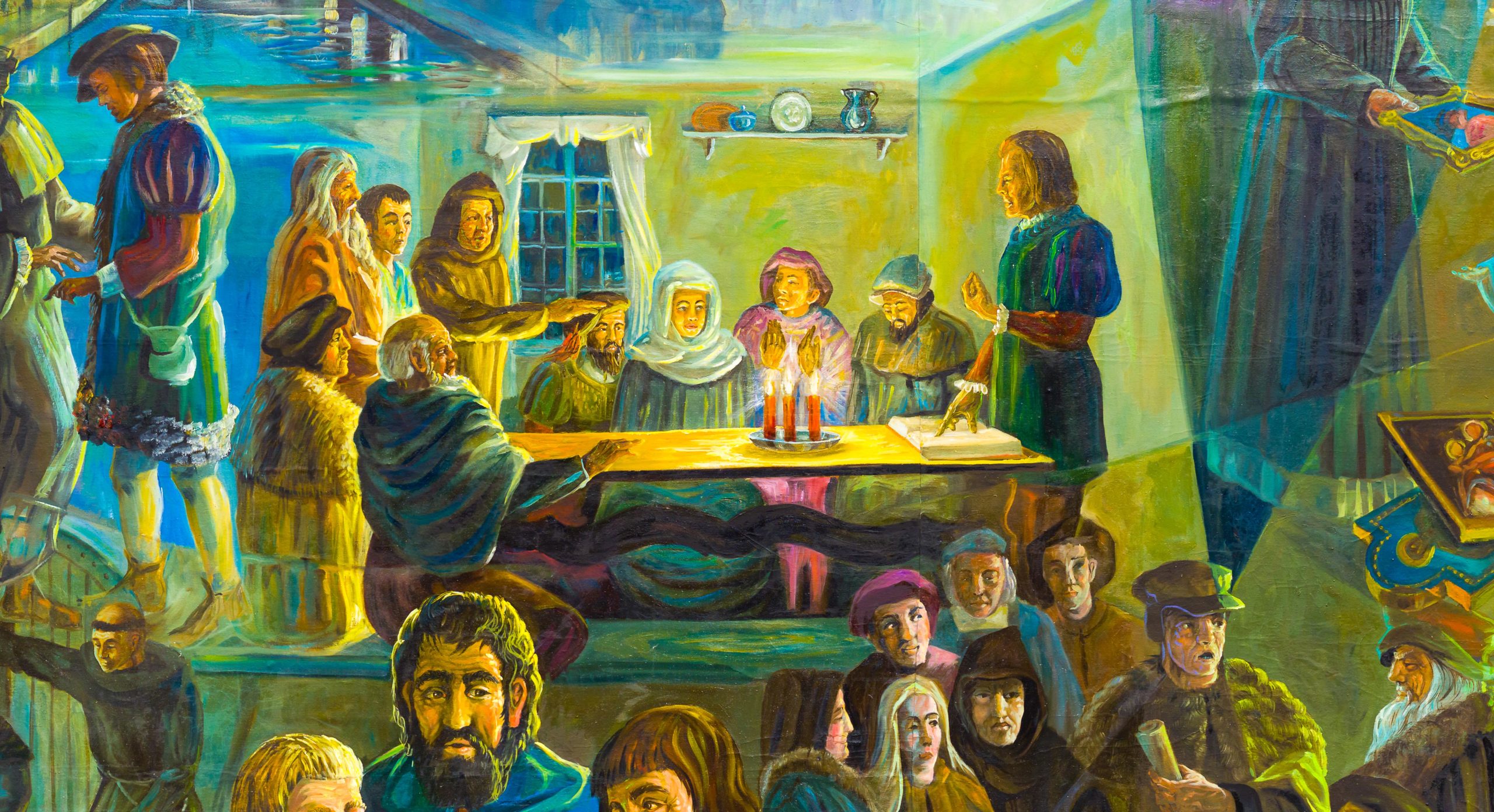 A Radical Kind of Love

Women who chose to be rebaptized during the Reformation, were making a conscious decision to follow a path that veered sharply away from the reforms of Luther and Zwingli. The bold contrast is evident when comparing the life of Helena von Freyberg, an Anabaptist woman, to the life of Katharina Zell, a Lutheran woman.  Both women lived during the time of the Reformation in the early 1500s. They both spoke, wrote, proselytized, aided the reforms—and sheltered reformers—but for different sides and with profoundly different consequences. Helena chose to side with Anabaptism, a faith which was marginalized in that era by the Lutherans, Zwinglians (Reformed), and Catholics. She made the conscious choice to become a part of a radical faith not dependent on systems or forces of the world. We will contrast Helena von Freyberg’s life with that of Katharina Zell, who chose the Lutheran faith and thereby was able to remain within a state dependent system.

Katharina Zell was born in Strasbourg and lived her entire life in the city of her birth. A devout and faithful member of the Roman Catholic Church in her youth, she heard the teachings of Martin Luther from a local priest, Matthew Zell, in 1521.  She embraced the new reforms of Lutheran teachings, then married Matthew Zell on December 3rd, 1523. Katharina would clearly have understood that her marriage to a Catholic priest turned Lutheran pastor was an alignment with the Protestant reforms.

As Zell’s wife, Katharina sheltered and fed not only fellow Protestants on the run, but also large numbers of refugees from the German Peasants’ War. With at least a vernacular education, she wrote tracts, letters, and songs.When her husband died in 1548, she wrote an extended Lament and Exhortation, in much the same manner as sermons that were circulated at the time.

Five years after the death of her husband, an incident occurred where she remonstrated Ludwig Rabul, a former boarder at her house, on a theological matter on which they disagreed. He accused Katharina of being “a disturber of the peace of the church.” She replied to Ludwig Rabul’s accusation with a public letter of defense to the whole citizenship of Strasbourg wherein she said, “I have never mounted the pulpit, but I have done more than any minister in visiting those in misery.” She described her role and identity as “a church mother, nurturer of pulpit and school” and that from her “younger days I was so dear to the fine old learned men and architects of the Church of Christ…. They never withheld from me their conversation about holy matters and they gladly from the heart heard mine.” Although she had contact with Anabaptism, Katharina never chose rebaptism, instead working for Lutheran reforms.

Whereas Katharina Zell worked for Luther’s reforms, Helena von Freyberg was a woman of nobility who worked for Anabaptist reforms in the Tyrol region of Austria. Helena was an only child whose early connections with reformers were mixed with old family connections from the “von Freyberg” family and the “Marpeck” family. As an example of the two families’ interconnectedness, Helena’s father Gilg, a noble man from Münichau, sold Heinrich Marpeck “mining and grazing rights.” As reforms broke out, Helena and Heinrich Marpeck’s Anabaptist son Pilgram would find their paths cross in unusual ways. In addition, the castle in their hometown of Münichau would play an important role for Anabaptists in the region.

When she was around twenty, Helena married a young baron of equal nobility named Onophrius. Together they had four sons who became knights. Legend says that Martin Luther visited Onophrius at his castle in his hometown of Hohenaschau in 1518; if this is in fact true, Helena had knowledge of—and possible interaction with—early reformers.

As the Anabaptist movement spread out of Zürich, Switzerland, and into Germany, the Tyrol region of Austria, and Moravia, the teachings evolved with the different leaders in the various regions. In and around the city of Augsburg, Germany, it was Pilgram, the son of Heinrich Marpeck, old family friend to Helena’s family, who emerged as a later influential Anabaptist leader in the southern Germanic regions.

Helena first appears in court records associated with Anabaptism in 1528.  In 1523, Helena inherited the Münichau Castle when her stepmother needed funds to free herself from debt after the death of Helena’s father.  Eventually, Helena occupied the castle and made it a center for Anabaptist activity. When her name first appears in the records, it states that she and her whole household had been rebaptized. Reports also included services held by prominent ministers, including Pilgram Marpeck. From at least 1527-1529, a church flourished there in Helena’s Münichau Castle.

It was not until 1529 that reports were verified by an arrested individual and the order went out for her arrest. Helena fled in time to avoid arrest, first to her husband’s residence in Tyrol. Discovering she was no longer safe in the Tyrol region, she fled yet again, this time to Constance, a city that today is near the border of Switzerland, Germany, and Austria. Once she settled in Constance, she set about proselytizing and working to further the cause of Anabaptism until driven out of that region in 1532.

For a brief period she returned to Tyrol when she won her case to recant in private. Having done so, rather than live in quiet, she once again became an active Anabaptist. Helena then relinquished her castle and other property, and her rights, as citizen of her homeland of Tirol. During these times,, she was supported financially by her husband and sons who remained in the Tyrol region, under the influence of Lutheran and Zwinglian reforms.

Finally forced from Tyrol for the last time, Helena lived the final eleven years of her life in Augsburg, Germany. These years proved more productive than her early years in advancing the cause of Anabaptism. During this period she instructed her tailor Hans Jacob Schneider in the Anabaptist faith. In the 1550s and 1560s, he would go on to become a major Anabaptist leader in the Augsburg area working with Pilgram Marpeck.

It was also during this time she was involved with the Damenkrieg, or the “war of the ladies.” The Damenkrieg was an effort between Anabaptist leaders Pilgram Marpeck and Casper Schwenckfeld to gain support of noblewomen such as Helena. Her old family ties to Marpeck, plus the fact that Schwenckfeld was living with Helena’s brother-in-law, provided her with a unique place of influence. It was Helena and Magdalena von Pappenheim who passed letters and writings between Marpeck and Schwenckfeld.  Through all of it, Helena remained committed to Marpeck’s theology.

Marpeck insisted that God’s kingdom is one of love: “Here there is no coercion, but rather a voluntary spirit….”  Helena chose to follow this path of radical love and stake her own life on the One who said of His life, “No man taketh it from me, but I lay it down of myself.”

Helena might have chosen to remain with her husband and family, as did Katharina Zell, and work for Lutheran and Zwinglian reforms. Instead, she chose a way that followed the teachings of Jesus as written in the New Testament. Her life and her writings reveal that the Anabaptism that she committed her life to is rooted in the authentic Christianity of the early church. Followers of this kind of authentic Christianity prioritize loving God and others—even at the cost of their own lives. While Helena suffered the loss of her homeland, her children, and grandchildren for the sake of her faith, she gained a spiritual family and heritage that reached far beyond her life. Her faith resided in a God who says, “For whoever would save his life will lose it, but whoever loses their life for my sake will find it.”

If you wish to hear more historical stories please call or visit the Amish & Mennonite Heritage Center. We offer guided tours of the “Behalt”, a 10 ft. x 265 ft. cyclorama oil-on-canvas painting that illustrates the heritage of the Amish and Mennonite people from their Anabaptist beginnings in Zurich, Switzerland, to the present day. Behalt means “to keep” or “to remember.” We are open Mon-Sat 9:00-5:00 and are located near Berlin, Ohio. You can find us at 5798 County Road 77, Millersburg, OH 44654. Visit them online at www.behalt.com. Please call (330) 893-3192 for more information or to schedule a day or evening group tour.