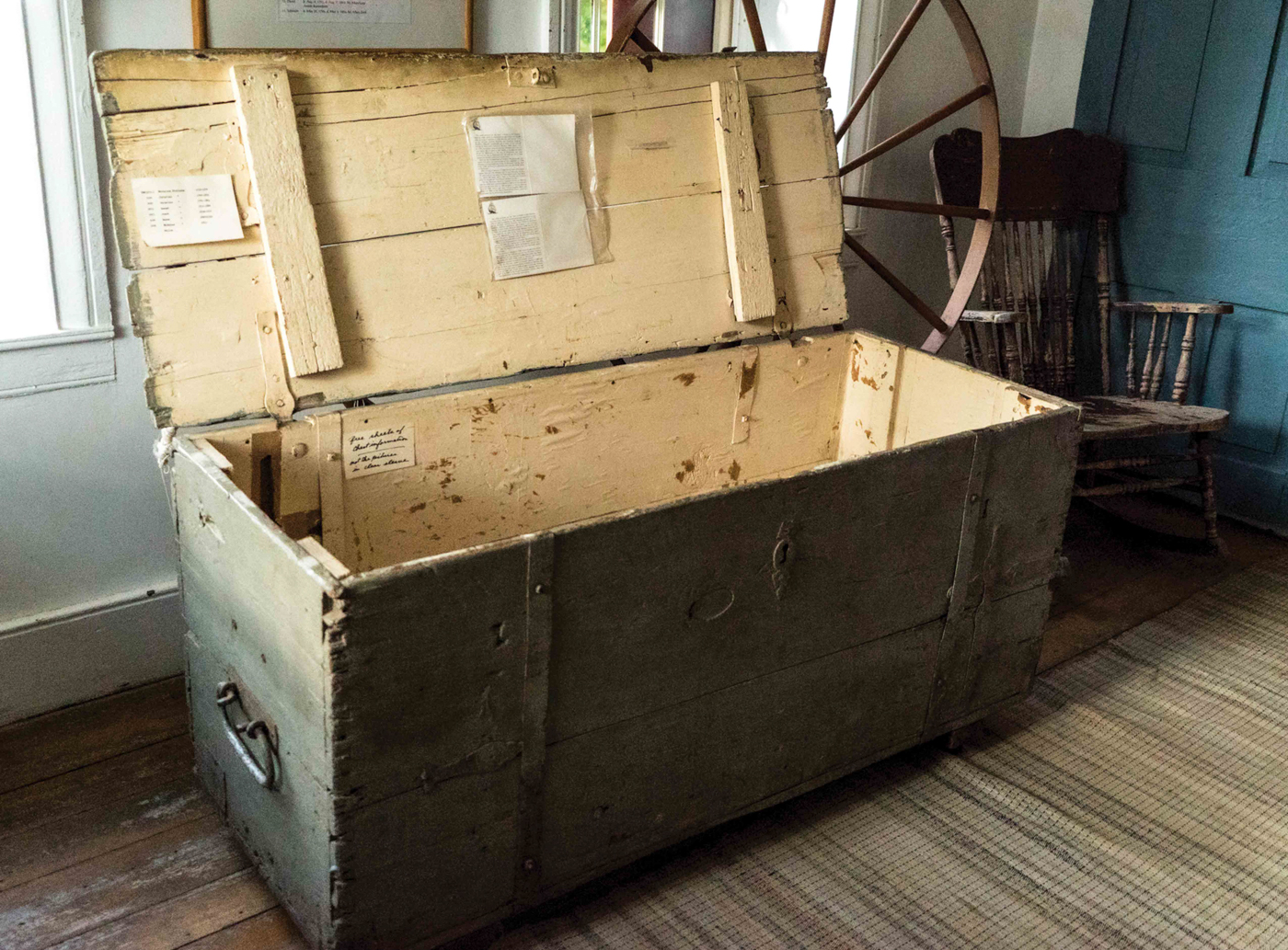 How much do we know about what books our ancestors brought along when they left the old country for America? What books brought them comfort during the arduous, months-long journey across the Atlantic to Pennsylvania in the 1700s? We know that many families brought along a chest of their few beloved belongings. For example, in 1766, my immigrant ancestors—Nicholas Stoltzfus and his family —brought along a large wooden chest from Germany. We don’t know what items they had packed in the chest, but we do know that, according to his 1775 estate inventory, Nicholas owned a “Bible and other books.” It’s possible that one of those “other books” was a European-bound Ausbund that he brought over from Europe. Sometimes I imagine Nicholas with his wife and children singing the Lob Lied on a stormy Sunday morning out at sea, taking comfort in those verses as they wonder what their new life will be like in Pennsylvania.

Starting around 1720, there was a large increase of immigrants from German territories bound for William Penn’s “Holy Experiment.” Many of these new immigrants to Pennsylvania were risk-takers, and a few were entrepreneurs. Several of these new entrepreneurs started new enterprises in diverse fields such as farming, banking, brewing, trading of goods, and printing.

In 1724, in Germantown, Pennsylvania, Immigrant Johann Christoph Saeur had founded several successful businesses in the colony. As a sort of “jack of all trades,” Saeur had experience as a cabinetmaker, apothecary/chemist, botanist, clockmaker, and paper-maker. As a German Baptist, he built his businesses on a strong foundation of faith-based convictions.

Sauer realized that the opportunity was ripe to start a printing business geared towards his fellow German immigrants. In Germany, the custom for starting your own printshop meant that someone first spent many years training as an apprentice with a guild. This was not the case in early America: one of the freedoms in America was the ability to start a new business without being trained with the guild. Sauer commented, “there is neither guilds nor burdens from the authorities” to start a printing business. Sauer didn’t have any experience in printing and hadn’t apprenticed with anyone. But what he did have was a bold vision, determination, and connections.

The first step Sauer took was to reach out to his German Pietist friends who had successful printing operations in Halle and Frankfurt. With the help of his German contacts, Sauer purchased the German type-blocks he needed for printing. Six hundredweight of Cöelnische Current-Fraktur type was shipped over to Sauer in 1738.  Sauer didn’t own a printing press, so, with his carpentry skills, he went to work to build his own printing press. With his chemistry skills, he mixed a new ink known as “Sauer’s Curious Pennsylvania Ink-Powder.” One of the obstacles for Sauer was to purchase paper for printing. At the time, Benjamin Franklin managed most of the paper market in Philadelphia and the surrounding area. Franklin would not extend credit to Sauer to purchase paper to print the Seventh-Day Baptist Brethren hymnal. Colonial diplomat Conrad Weiser traveled from Ephrata to Philadelphia to help Sauer negotiate the purchase of paper supplies from Franklin.

Finally, Sauer had the German type, the press, the ink, and the paper: he was ready to print! With his Pietist religious convictions, he had a strong belief that providing printed material would be for the “glory of God and the physical or eternal good of my neighbors. Whatever does not meet these standards… I will not print,” he said. “I am happier when I can distribute something of value among the people for a small price, than if I had a large profit without a good conscience.” 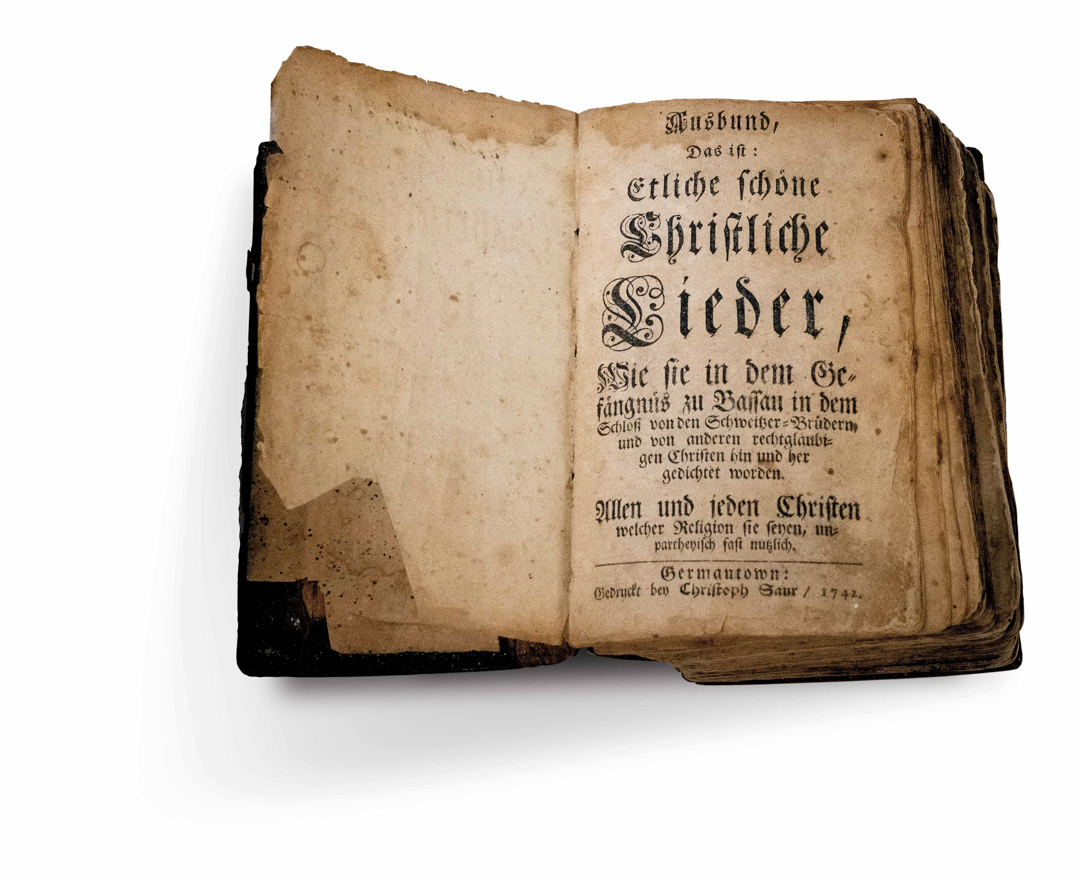 With this business model guiding his interest, he published a religious broadside for Benjamina Padley, a female Quaker prophet. He followed this success with printing the “ABC Book” for Christopher Dock, a local Mennonite school teacher, and a hymnal for Conrad Beissel from the Ephrata Cloister. He also printed hymn books for the Moravians, German Baptists, German Reformed, and Lutherans.

In 1742, Sauer published the Ausbund hymnal for the Mennonites and Amish. Sauer printed two more Ausbund editions in 1752 and 1767 for the Amish and Mennonites. These were the first printings of the Ausbund in America. (As an aside, I sometimes wonder whether one of Immigrant Nicholas Stoltzfus’ “other books” was one of these Pennsylvania-printed Ausbund.)

On August 17th, 1784, the printers Peter Liebert and Michael Billmeyer met with several Mennonite and Amish leaders to discuss printing for the 4th American edition of the Ausbund. Christian Burkholder (1746-1809, Mennonite bishop), Christian Eby (1734-1807, Mennonite deacon), Bentz Hirschy (1696-1789, Mennonite bishop), Jacob Kauffman (1730-1787, Berks Cty. Amish), Johannes Knegy (1742-1815, Berks Cty. Amish), and Jacob Sensenig, Jr. (1730-1814, Mennonite) met with the two printers to work out details for the Ausbund printing. The group agreed upon a price of seven shillings, six pence gold, and a silver piece. Liebert and Billmeyer promised to print 2,000 copies on high-quality paper and bind it in calf leather. Interestingly, there was a note in the negotiations that Christoph Sauer—the printer for the last three versions—was to inspect the book for final approval. This 1785 printing was a repeat of Sauer’s 3rd edition.

What is important about this 1784 document of agreement is that it reveals that the Mennonite and Amish leaders were involved in the negotiations of the American Ausbund Hymnal printing in the 1700s.

By the early 20th century, American sentiment had turned against Germans and the German language because of World War I and, later, World War II. As a result, speaking and reading German in public became taboo and many printers of German-language material stopped printing German text. For example, in 1901, the Mennonite periodical Herold de Warheit was discontinued and became the English Herald of Truth.

The conservative Plain communities desired to continue to use German-language books and hymnals at their church services and at home. But, as their books became frayed with use and in need of replacement, they were having a hard time finding new printers for the Ausbund and other books.

Who would have a bold vision to continue to print the Ausbund in America? Who would step up as determined leaders dedicated to preserving the Plain community’s beloved hymnals, Gebet-Buch, and Bibles?