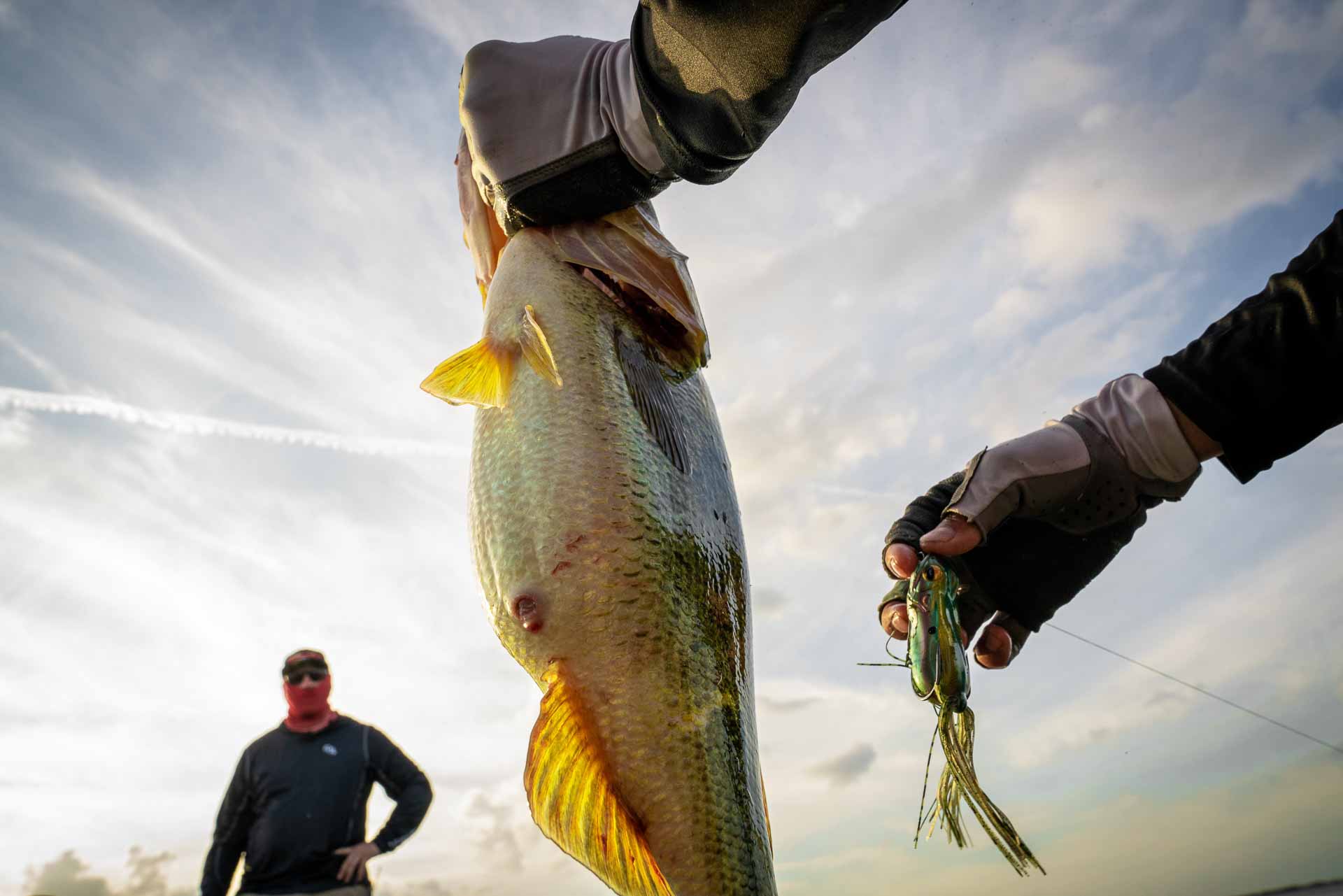 When I was a youngster, I had a serious goal. I wanted to catch a five-pound largemouth bass. In those days, that was a tough challenge. I usually fished a couple local ponds from shore, and I’d watch big bass swim by. Though I cast every lure I had at them, I never enticed one to strike. Now and then I’d catch a smaller bass, and plenty of sunfish, yellow perch, and bluegills, but the outsized bass had lockjaw. I finally caught a five-pounder when I was 16, and it was a huge thrill to achieve that goal.

As time passed, bass fishing gained in popularity, but it wasn’t until Ray Scott founded B.A.S.S. (which means Bass Anglers Sportsman Society) in the late ‘60s when the sport exploded. In a short time, the fish was elevated from being “just” a fish to one of a revered national treasure. Bass fishing tournaments are now held all over the country, with the “Super Bowl” being the three-day Bassmaster Classic where $300,000 is the top prize. Anglers must compete in tournaments around the country and earn enough points to qualify for the Classic. In 1972, the first-ever Classic was held in Lake Mead, Nevada. Until 1977, the event was a mystery to all the participants. They flew to an unknown destination and had no chance to research or scout the lake to be fished. When that changed, fans of the Classic could plan to attend the event, and participants had a chance to size up the lake. Because tournaments became so popular, there was a concern that bass numbers could be seriously impacted because of all the fish caught. New rules required that all bass entered in the tournament had to be released. As soon as they were caught, they had to be immediately placed in the boat’s live well. If any fish were dead at the “weigh-in” when the event was over, the angler was seriously penalized. That penalty could spell the difference in winning or losing, so it’s always critical for anglers to take care of their fish so they could be released unharmed after being weighed.

Many years ago, I attended a bass tournament on Lake Havasu, Arizona (not an official Classic event). I went along as a magazine reporter where the press was allowed to fish with the competitors. Each reporter rode in a competitor’s boat and was offered the opportunity to fish or just observe and take notes. The man I fished with was Rick Clunn who at the time was one of the top anglers on the tournament trail. I opted to observe because I dared not catch a bass that Rick might have caught! I was told that Rick would barely say 10 words all day, so intent was he on concentrating on what he was doing. Rick was amazing. He caught bass in weed-choked areas where you wouldn’t think possible. He won the two-day tournament and was awarded the $100,000 grand prize. And yes, he said less than 10 words each day, which were, “Would you please pass me a sandwich?” By the way, Rick now is tied with another angler as having won the most Classics ever–each has won four.

Technically this fish is called a largemouth bass, not to be confused with the smallmouth bass. The latter has different markings, a mouth that’s not quite as large, and typically is found in much colder water. The smallmouth is found in more northerly waters, though trophy fish inhabit some deep southern lakes. 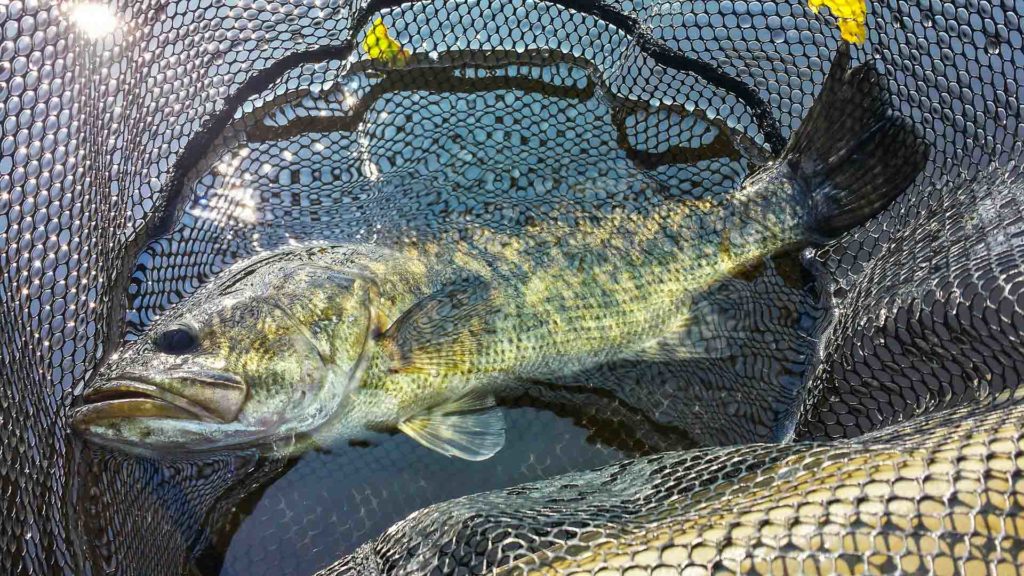 As fish go in America, quite possibly the most famous fish of all is the world-record largemouth bass caught in Montgomery Lake, Georgia, by George Perry. The monster fish weighed 22 pounds 4 ounces and was caught in 1932. That bass, and George’s name, are now a household word among bass anglers. Most everyone knows who caught that giant fish, how much it weighed, and where and when it was caught. It’s now common belief that if a bass bigger than George Perry’s is ever caught, that angler will enjoy instant fame and fortune. Untold thousands of people have been trying to beat the record for years — some coming very close. Interestingly, a Japanese angler caught a bass in Japan that weighs the same as Perry’s, and there’s now a tie.

Most of the giant bass came from the southeast, notably Florida. Curious anglers began to wonder if there was a “Florida strain” that produced really big fish. Many people figured that Florida’s bass enjoyed warm water year-round and could feed all year, which is why they grew so large. But there were some who believed that there indeed was a Florida strain. Some of those fish were stocked in Southern California waters. Amazingly, those Florida fish quickly grew to record-sized proportions, far bigger than the bass that normally inhabited California waters. Florida bass have now been stocked in many more California reservoirs as well as in impoundments in Texas and other southern states. Many of those huge Florida bass weigh 20 pounds or better, but not yet bigger than the world record.

Let’s shed the celebrity status of the bass and look at the fish itself. They endear themselves to anglers for many reasons. They’re often abundant in places where they’re found, they’re eager to strike a wide variety of lures, and they put on a powerful, flashy fight with many jumps high out of the water. But they can be moody and secretive, difficult to catch for reasons that only a bass knows. Largemouths inhabit underwater environments called “structure.” This can mean sunken treetops, lily pads, dense vegetation—anything offering hiding spots where they can quickly strike out at prey fish that swim too close. Their huge mouth can engulf a baseball when fully opened. They can be school fish or they can be solitary. They’ll eat anything they can catch, including frogs, snakes, birds, crawfish, swimming mice, dragonflies, and especially smaller fish. For that reason, lure manufacturers have designed untold thousands of lures over the years. Anglers have spent billions on those lures, not to mention money spent on boats, motors, clothing, and all sorts of accessories. There’s always a great deal of interest in new lures, especially those that work well in the tournaments. Some bass lures now fetch more than $20 each. Imagine snagging one of them on an underwater object and breaking it off! That’s a serious loss.

But then there’s always the reliable nightcrawlers and minnows, which we can catch ourselves. In my opinion, nothing excites a bass so much as a lively nightcrawler dangling below a bobber or a lively minnow dancing around and teasing a bass. I have tackle boxes full of lures, but to me, it’s more fun to use natural baits that I’ve caught myself. I remember when plastic worms came on the market. They created a sensation in the world of bass fishing. The most common technique was to cast it out, let it sink to the bottom, and slowly reel it in with little jerks. Problem was, the bass seldom attacked it with gusto, so the strike was very light. You had to not only be able to recognize the strike but to rear back hard and fast on the rod to set the hook. It took some doing, and many anglers initially thought they were a hoax. But they indeed work, as probably every serious bass angler would agree. Now the worms are offered in a large variety of colors, sizes, and shapes, and can be rigged a dozen or more different ways.

When I was a small boy, I bought my dad a black Jitterbug every Father’s Day. It was a tradition for several years. I saved up part of my allowance in order to make the purchase. The Jitterbug is a floating lure with a large metal lip that causes it to make loud plopping sounds on the lake’s surface as it’s being retrieved. Bass become agitated and interested in this action, perceiving the lure to be something to eat. This is especially true in the black of night when big bass are active. My dad would go out with a couple buddies in a rowboat and catch loads of bass on those Jitterbugs. He believed that the blackest nights were most productive when the moon and stars were hidden by thick clouds. As I grew older, I went out with my dad or a buddy on black nights so dark you couldn’t see the shoreline from your boat. You didn’t dare turn on a flashlight because that might scare the bass and interfere with what little night vision you had. More often than not, my companion or I would cast too far and toss the lure into tree limbs. On would come the flashlights, and we’d tug on the line to hopefully break the lure free. It was a thrill to be sitting in the boat on a quiet night, listening to God’s creatures as they collectively emitted beautiful sounds. Bullfrogs, peepers, whippoorwills, and all sorts of birds and amphibians synchronized their voices in an open outdoor choir. As I sit here writing this, I can close my eyes and still hear those sounds. That, to me, is a big part of what fishing is all about, not to mention that those bass fillets are mighty delicious when pan-fried in butter and your favorite spices. It’s a win-win any way you look at it 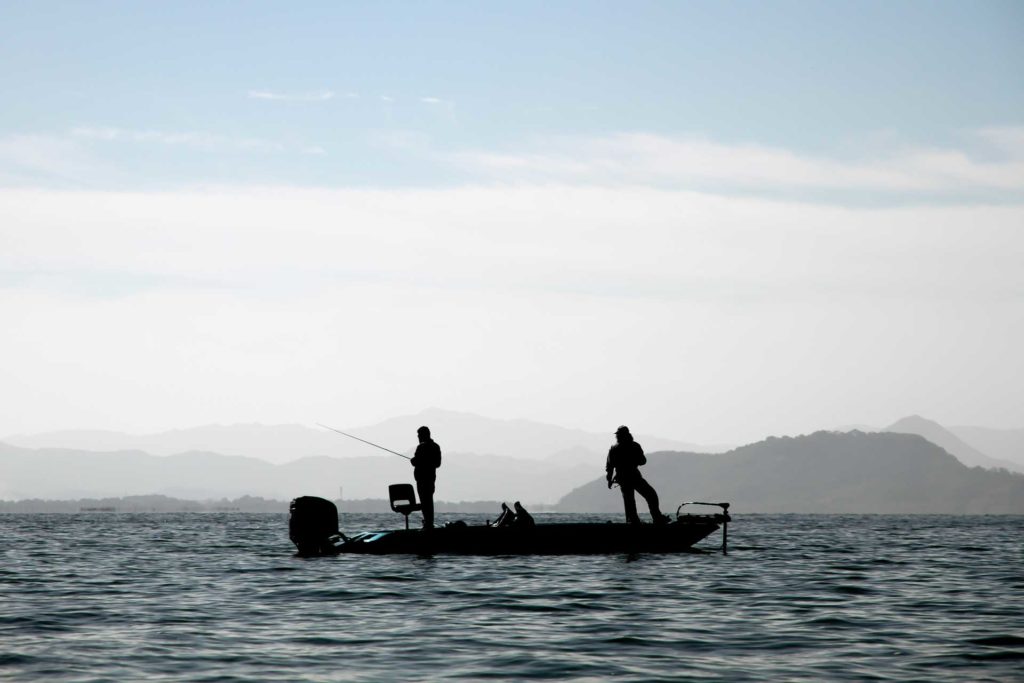