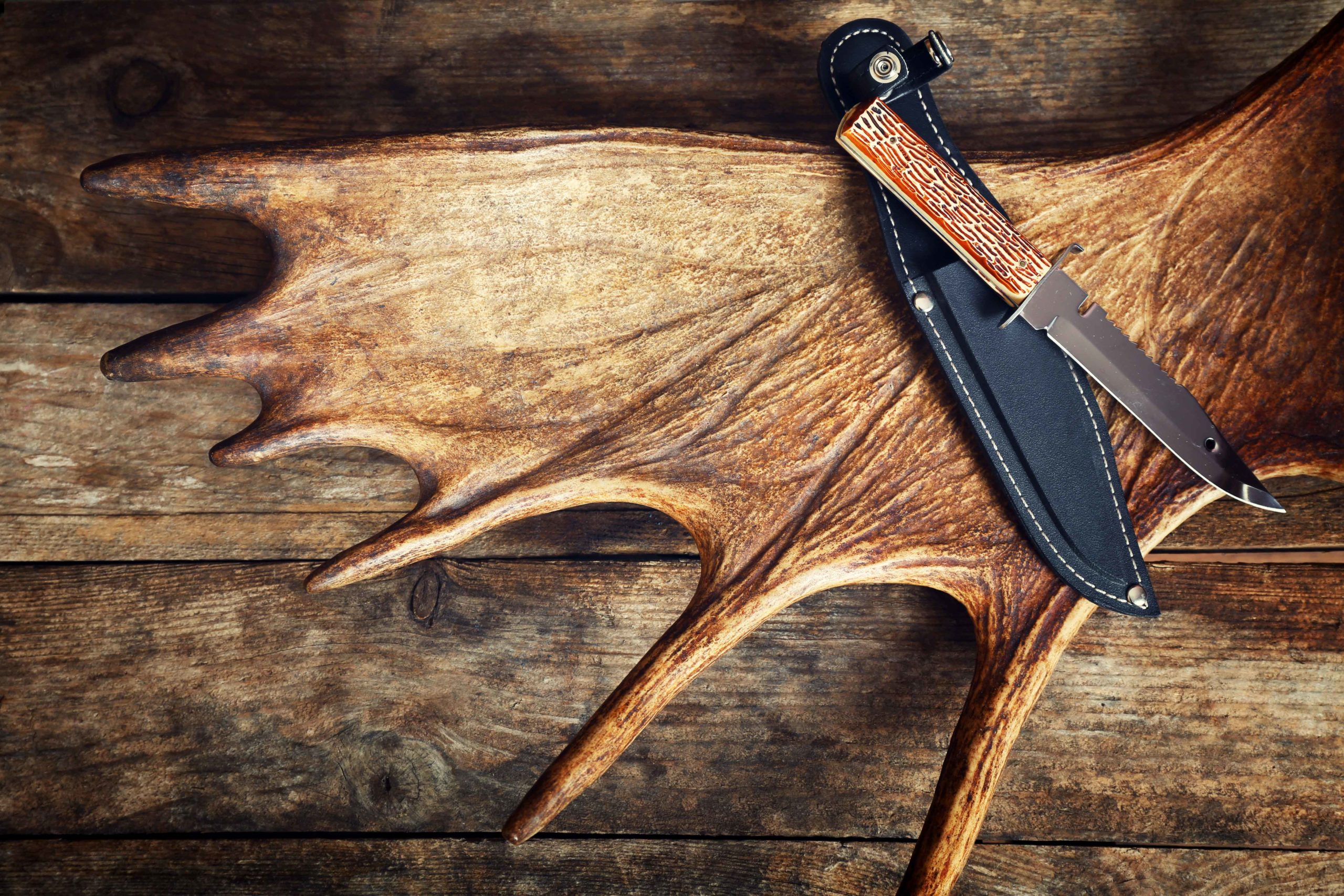 Is a Moose Hunt Right for You?

When you think about a moose, you think about a very big animal with a massive body, a very large nose, and profoundly impressive antlers. There are technically three subspecies of moose in North America. The biggest is the impressive Alaska-Yukon moose, which can tip the scales at 1800 pounds or more. Then there’s the Canada moose, somewhat smaller than the Alaska-Yukon, which can weigh up to 1500 pounds. That leaves us with the Wyoming or Shiras moose, which weighs 1200 pounds soaking wet (even though it’s the smallest moose, it’s still plenty big!). A mature Alaska-Yukon moose will stand seven-feet high at the shoulder, and its antlers are the biggest of all antlered wildlife species in the world.

Moose are denizens of the north. They thrive in Alaska, Canada, and several northern states. In the US, they live basically in three regions–the Rocky Mountains, the Lake States, and New England. Moose are built for water, extreme cold, and deep snow. In much of their range, they prefer to forage on willow and other shrubs. I’ve seen them feasting on lush green grass in the mountains after the snow recedes in the spring. In fact, I’ve watched them kneeling so they can lower their long neck to reach the grass. It’s fun to watch a moose in a marsh completely submerge its head and come up with a clump of lily pads and roots.

There are a number of factors to consider if you want to hunt a moose. First and foremost is a strategy to move a massive amount of meat if you’re successful. Here’s an old saying among moose hunters: “the best moose is the one that falls close to a road.” There’s a lot of truth to that. The worst case scenario is dropping one in the water. Most veteran moose hunters will pass up a shot at a moose standing in water because they’re so heavy, but there are instances where a perfectly hit moose will plunge into a lake or river before it expires. If that happens, roll up your sleeves and prepare for the worst field-dressing chore you’ll ever experience.

But before you get to the point of feasting on moose meat, which is delicious, you must first get a moose. Therein lies a complication. In the lower 48, the only way you can get a moose license is to draw it in a lottery. There are exceptions, such as being a high bidder in an auction sponsored by sportsmen’s organizations or purchasing a rare landowners tag. However you get the license, be aware that it’ll be especially pricey.

Moose licenses are expensive, especially if you’re a nonresident, and they usually run into four figures. They’ll be much less expensive if you’re a resident of the state where you intend to hunt. The best case scenario is to live in a state like Maine, which has a large moose population, and do a DIY (do it yourself hunt) with some pals on public land. That’s the best case scenario, but you still have to draw a highly competitive license.

Most states offer preference or bonus points to improve your odds of drawing a tag. That’s a bit complicated to discuss here, but it’s worth investigating if you’re serious about a moose hunt. To learn more, you can check the regulations of the state you’re interested in. If you draw a tag, there are plenty of guides who will take you hunting. There are also millions of acres, especially in the Rockies, where you can hunt moose on your own on public land. No fee or permits are required.

You can hunt moose in Canada by booking a hunt with an outfitter. There’s no need to draw a license. He will provide the license, guide service, accommodations, transportation of the meat, and other needs. Be aware that Americans cannot hunt big game in Canada without a licensed guide. There are two basic Canadian hunts. One is a trophy hunt where you’ll be looking for a bull moose with 45-50 inch wide horns, and the so-called “meat hunt” where you drive up, shoot a modest bull or cow, and bring the meat home with you in a vehicle.

To hunt the king of the moose, the Alaska-Yukon, you can select one of two options. Since the Yukon is in Canada, you’ll need an outfitter. Those hunts are extremely expensive, in the $18,000 to $20,000 range or more.

Alaskan outfitters offer guided moose hunts that can be upwards of $25,000 or more. The big difference in an Alaskan or Canadian hunt is that nonresidents don’t need a guide but can hunt moose on their own in Alaska. That’s not the case with some other Alaska big game species where a nonresident must hire a guide. The non-guided hunt is an opportunity to make a dream hunt come true with the least amount of money. Here are the two best options.

You can arrange for a transporter to fly you into a remote area in a bush plane and drop you and your party to hunt on your own. The pilot will leave you by yourselves. You’ll stay in tents and be responsible for getting the meat to a place where the plane can pick it up. This obviously is a hunt for folks who are physically tough. Moving hundreds of pounds of meat in the wet tundra and thick willows can be a formidable task.

The other option is a thrilling adventure. Again you’re dropped off by a transporter, but this time on a river. He’ll leave you with rafts and all the supplies you’ll need for a week or more. You’ll float the river, make camp every evening, and be responsible for all the logistics. Some hunts offer an additional opportunity for a caribou and black bear. As you can imagine, this can be an incredible adventure. 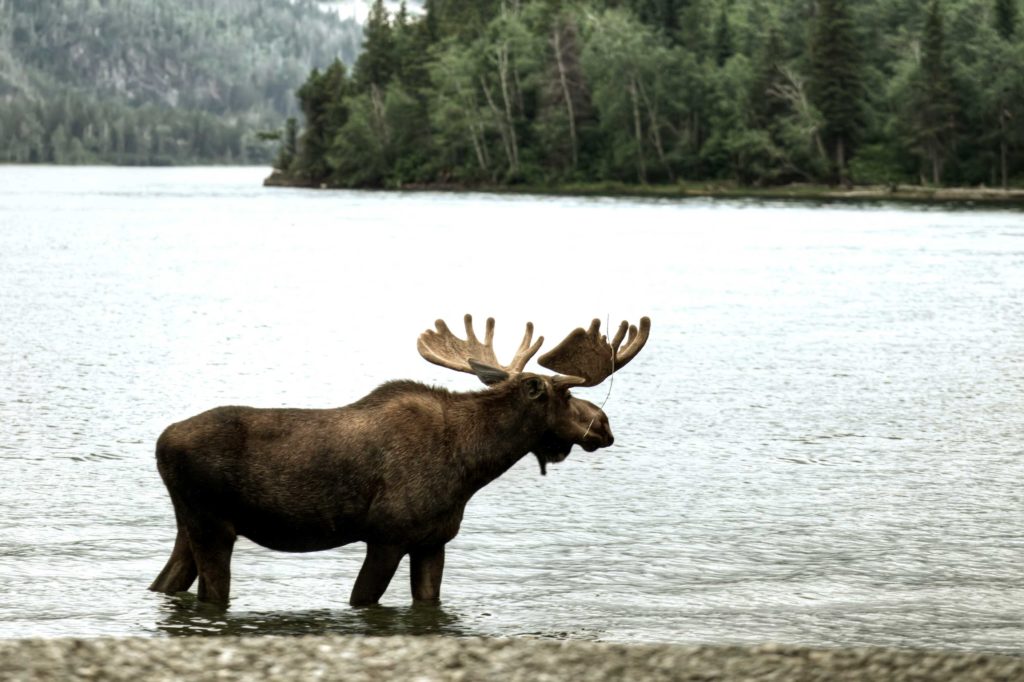 Now that we’ve addressed the “where-to” aspect of hunting moose, we need to discuss hunting techniques and strategies. The prime time to hunt a bull moose is during the breeding season or “rut.” As whitetail deer hunters know, the quarry is usually more vulnerable because mating is on their minds. The moose rut occurs about the same time as elk — from mid-September to mid-October. Bull moose are solitary animals and are always on the lookout for cows during breeding season. For that reason, imitating a cow is a prime strategy. The cow vocalization is a long bawl which sounds like nothing you’ve ever heard before. To do it properly, you really need to be with someone who can show you the technique first hand. You pinch your nose with two fingers and let out a long mournful wail, which would scare the living daylights out of anyone who heard it and didn’t know it was a human imitating a cow moose. The bull also vocalizes, making a grunting sound. He does this mostly when he’s excited and is in the vicinity of a cow or is responding to your cow call. You can grunt every now and then as you move along, hoping a bull is in earshot. If he hears you, he typically is not happy with another bull in his territory and might come to you looking for a fight.

Rutting bull moose will do some surprisingly goofy things. Once, when I was floating a river in the Yukon, my guide let go with a loud grunt. Suddenly, a huge bull moose appeared out of nowhere from the willows next to the bank and glared at us. He tore up willow trees left and right and let us know he was the boss. Mind you, we were in the middle of a river 30 feet wide, and we certainly didn’t look like a bull. Obviously he didn’t appreciate our presence. We beached the boat, and I was able to make the shot count.

Another time in British Columbia, my guide called a modest bull from half a mile away. We watched him run right at us in an open meadow, and when he got within 30 feet, he skidded to a halt. We waved and tried to scare him off, but he stood there and stared. The bull had been fighting a willow tree and had a big branch stuck in his antler. My guide and I had a good laugh.

On a Newfoundland hunt, a bull moose decided to stroll through our hunting camp. I was sitting in the main tent chatting with the guides when the cook spotted it. My gun was in a tent, so the cook grabbed her bear gun and a shell, and I handily collected that bull. To this day, it was my easiest moose hunt ever.

Both bull and cow moose can be dangerous, especially a cow with a calf. It’s always best to give them a wide berth. Many folks have been seriously injured and even killed by cows. Bulls can also be aggressive during the rut.