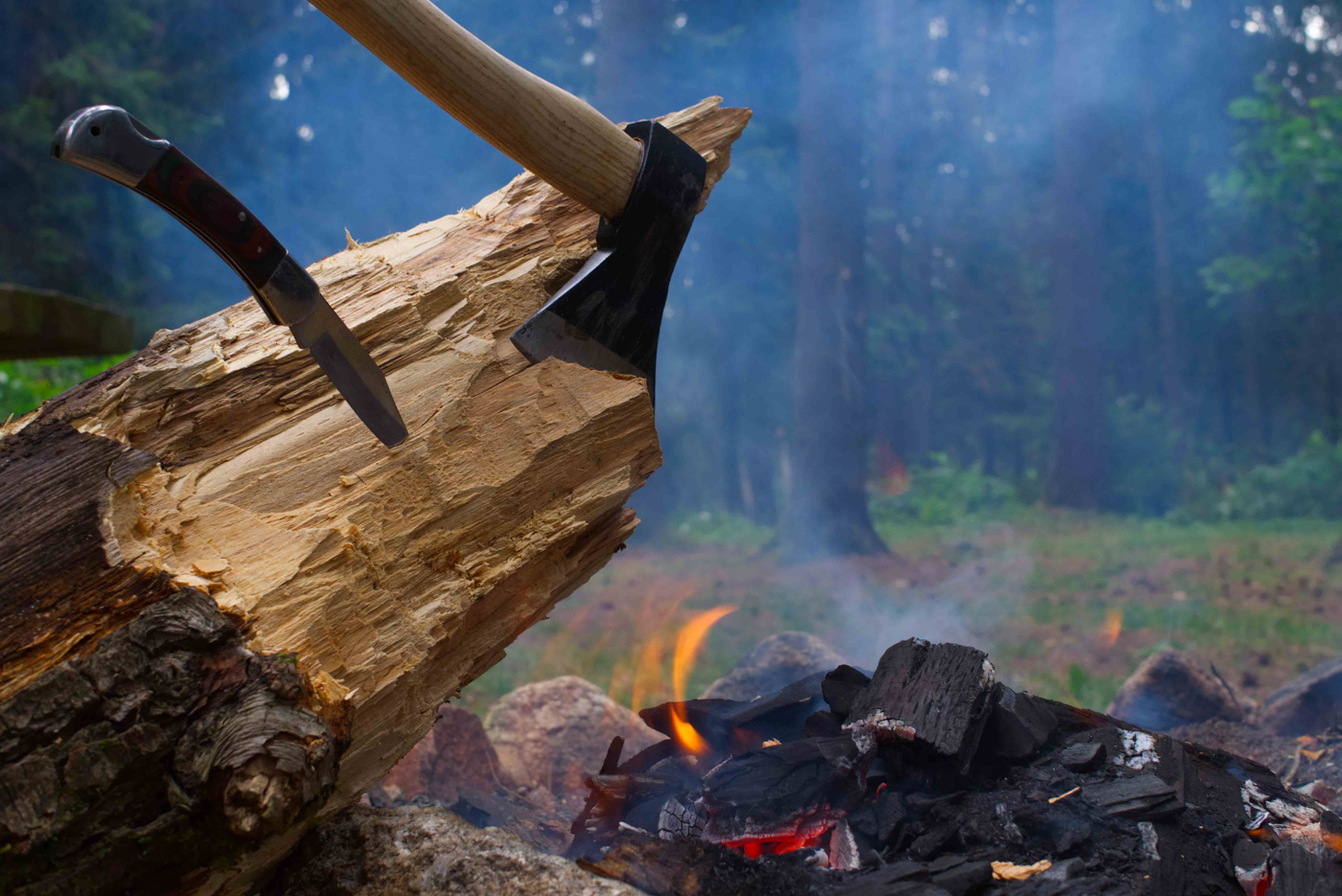 Most of us who participate in outdoor recreational activities build a campfire at some point, whether it’s warm or cold, while you’re hiking, camping, hunting, fishing, or just picnicking. Then there are times where a campfire is necessary to save your life in a survival situation. Interestingly enough, many folks don’t have the savvy to get a fire going when conditions are unfavorable, such as damp wood, not enough kindling, wet matches, strong winds, and other issues.

There’s something about a crackling, cheery campfire that appeals to us. We stare at the flames, watch the popping embers dance into the sky, and seem to be mesmerized. Any problems or issues we may be dealing with are temporarily forgotten. We’re totally enchanted with the remarkable healing power of a campfire. There’s often a silence among participants, each of us absorbed in our own thoughts as we watch the dancing flames, or perhaps the camaraderie that allows for bonding where we’re open to insightful conversation among new and old friends and family members.

We may inadvertently breathe some of the smoke, which can’t be helped if we’re downwind. The solution is to move our chair or stump since smoke is problematic to our eyes and lungs. Being too close to the fire can cause you to be too hot. If you’re too far, you might be too cold if it’s a cool evening. It might take a bit of seat juggling to find the perfect spot, and when you do, you can sit back and enjoy.

A fire needs three elements to burn—heat, oxygen, and fuel. If one is missing, it cannot burn. Heat is introduced to the fuel via a match or other device that causes ignition. Once the fuel is ignited, it produces its own heat. Fuel must be able to be ignited by a source that produces a flame, which then burns into the fuel. This is where attempts at building a campfire usually fail. The ignition source may be inadequate, or the fuel is too wet or green. Either way, your only reward may be a temporary fizzle or a tiny wisp of smoke that immediately disappears.

Let’s look at ignition sources. A simple match comes first. They can be in the form of paper or wooden matches that are ignited only by striking them on a sandpaper strip on the box, wooden matches that can be ignited by striking on any hard surface, or specialized matches that are waterproof and wind-proof and burn longer. My preference is the latter—the wooden types that have a long, thick head that defies wind for several seconds, which are usually long enough to get the tinder and kindling going. Even though I tried keeping paper and conventional wooden matches in waterproof containers, they typically failed in the wind or at attempts to light damp tinder. But nowadays, I carry the wind-proof matches only as a backup. My igniter of choice is the propane lighter that’s about nine inches long, very light, dependable, sold everywhere, and easily stowed in my backpack. For good measure, I’ll toss in a few small, cheap Bic-type propane lighters. One system I don’t fool with is the flint and steel method because it simply takes too much time and must be used with extremely dry tinder, which may not be available, especially if you want a quick fire under adverse conditions. With this technique, you must strike flint on steel, causing sparks to fly into a nest of dry tinder. This is fun to do if you’re building a fire for a picnic, a camping trip, or just a social campfire. You’ll impress your friends and family when you get a fire lit, but if you find yourself in a perilous situation, you want something that works immediately. That’s not the time to be fooling with any ignition system that’s iffy and not dependable.

Besides a reliable ignition system, it’s important to have dry tinder or kindling, which are essential to get the wood burning. Tinder can be in the form of balled-up newspaper, wood shavings, straw, pine needles, anything that quickly catches fire. It should burn long enough to heat the wood to the point where it begins to burn. I carry a variety of firestarters in my backpack, some artificial, some natural. All are stored in one quart sealed Ziploc bags. Natural starters that I prefer are pieces of white birch bark that I gather from dead trees, pieces of spruce sap called gum which is highly volatile (and sticky), fatwood that I find myself or buy in many stores, and pine cones that have pitch on them (though these are bulky and take up room in your backpack). If there are spruce trees around, the very lowest branches will be dry and slender and will burn easily, even if the surrounding forest is wet. My favorite artificial firestarter is easy to make. Fill an empty cardboard egg carton with wood shavings. Carefully melt paraffin in a double boiler (I use old candles, many of which I buy from thrift or charity stores) and pour the melted wax into the wood shavings. When cool and hardened, cut away each egg compartment with heavy shears. They light immediately and last for several minutes. (Be aware that melting wax and paraffin can be dangerous. Always use a double boiler.) Another easy one to make is to rub Vaseline thoroughly into cotton balls. They burn for several minutes, and you can store several of them in an empty pill bottle. Stores that sell camping supplies usually have fire paste that comes in a tube as well as many other types of firestarters. I take no chances when I’m outdoors in the wilderness. If I find myself in a survival situation, I want a fire right now. 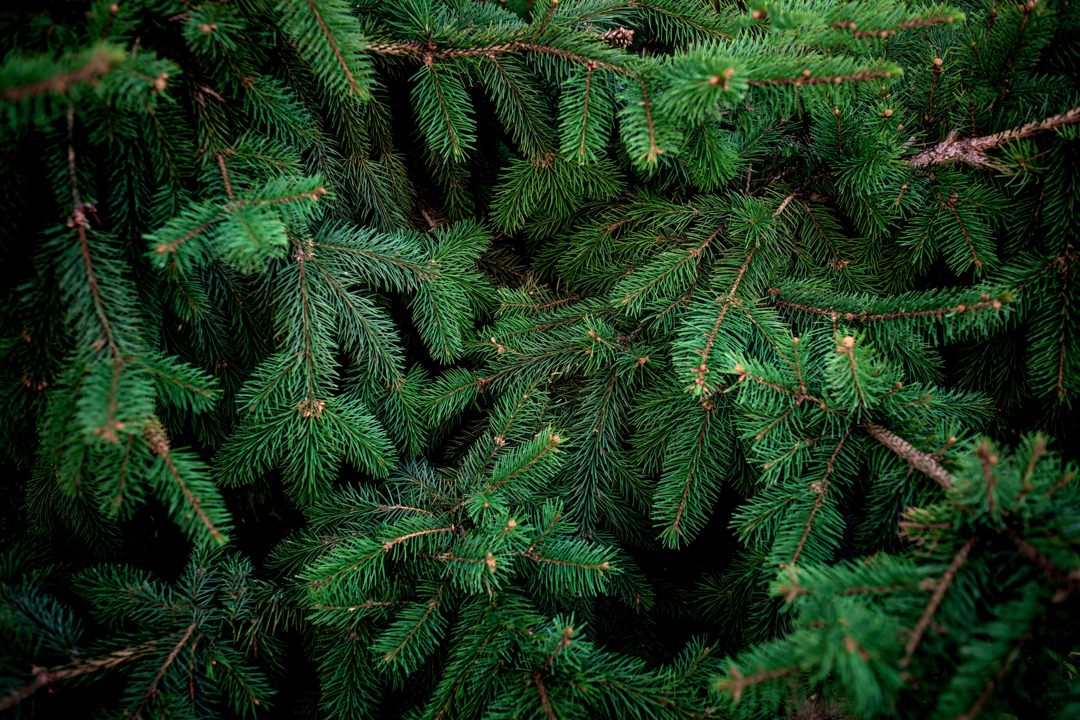 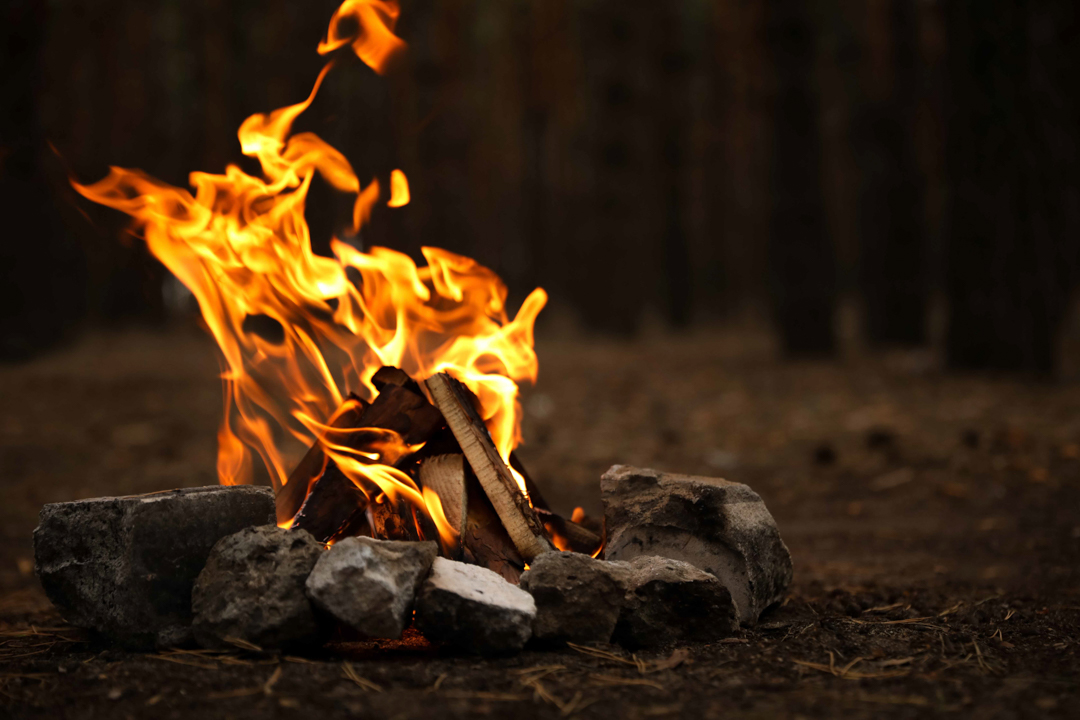 With your tinder and kindling ready to go, you can construct the two basic types of campfire structures if you wish—the teepee or log cabin. The teepee is made by adding small sticks over the kindling so they look like a teepee or wigwam. The log cabin looks like a square structure with the thickest sticks at the outside perimeter, and you work your way around with smaller and smaller sticks. Before lighting a fire, be sure you have plenty of wood gathered for your needs, especially the driest wood that will be applied once the kindling is burning.

I’ve been blessed with having a career that allowed me to work in the woods all my adult life. Countless campfires have been a big part of those adventures. Some are etched more deeply in my memory than others. A vivid memory that comes to mind is of a hunting trip for musk ox and caribou above the Arctic circle. Several Inuit families who camped next to us in tents joined our group of hunters. They were spearing and netting Arctic char and hunting caribou for their winter food supply. One day I accompanied the Inuits when they went to a falls and speared char. When they brought in a fish, they immediately cut them open and ate some of the choice morsels within. They also ate the flesh raw. A 12-year-old boy, Brian, ran off into the tundra and returned 20 minutes later with a huge armload of willow sticks that were as big around as pencils. That was the only wood for hundreds of miles. I watched with interest as he built a small fire, and I had no idea what he was doing. He then produced a small skillet and put in a chunk of butter, followed by a fresh char fillet. When it was cooked, he put the fillet on a plate and handed it to me with a fork. I was overwhelmed. Brian must have assumed I wasn’t interested in eating raw fish, so he cooked one for me. It was a touching act of kindness.

Campfires often nudge folks to reflect and chat about a variety of subjects that they normally wouldn’t mention. I’ve had the good fortune to have hunted and fished with General Chuck Yeager many times. He was the first person to break the speed of sound, and he was considered the best pilot in the world, having flown many combat missions and flying more than a hundred different jets as a test pilot. When we sat around a campfire, the General didn’t want to discuss flying. Instead, he loved talking about the allure and beauty of the outdoors and nature. He’d point out golden aspen leaves floating to the forest floor and how much he enjoyed the peepers, bullfrogs, and whippoorwills.

A campfire is many things to many people. It can save a life, help people bond together, or simply provide a way to cook a hot dog or marshmallow. Those are all good reasons to have plenty of campfires in your life!